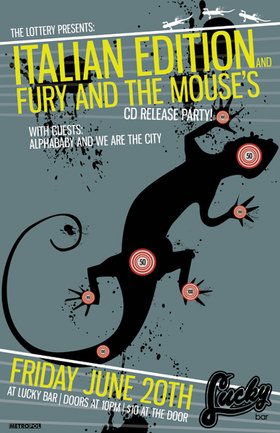 Music: Pop / Rock / Indie, Punk / Metal / Hardcore
Italian Edition AND Fury & the Mouse BOTH celebrate the release of their new CDs. With special guests Alphababy and We Are the City. THIS IS THE FINAL SHOW FOR FURY & THE MOUSE!!!

"Begun three years ago as an antidote to spare time and money, Italian Edition has struggled to maintain a strong presence in their hometown of Victoria BC, as well as across Canada. Bound together by a love for live chaos and honed songwriting, Jay Bhattacharyya, Jack Derricourt, David Sponaugle, David Williams, and Joshua Sparrow have forged a un... more info

Fury and the Mouse is one part immaturity, one part sexy adult. more info

Alphababy was conceived in the late weeks of summer 2005, in their hometown of Kelowna, British Columbia. The group began as: Vincent Jones (drums, percussion, vocals), Jeff Innes (bass guitar, synthesizers, piano, vocals) and Brandon Scott (guitar, vocals). Alphababy met each other through BCs musical community and began playing together after lea... more info
Submit info on this show to our admins