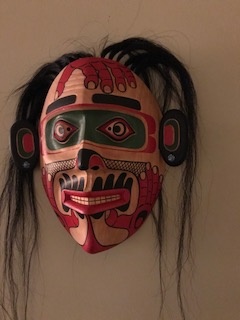 For most of his life, artist Richard Hunt has lived in Victoria. When he was 13, his father, the late Henry Hunt, began teaching him the skills of carving. After apprenticing under his father at the Royal British Columbia Museum for a year, Richard became chief carver for the Thunderbird Park Carving Program. In 1986 Richard decided to try his hand at being a freelance artist.

In 1991, Richard became the first Native artist to receive the Order of British Columbia, "in recognition of serving with the greatest distinction and excellence in a field of endeavor benefiting the people of the Province of British Columbia and elsewhere." Only three years later, in 1994, he was awarded the distinguished Order of Canada.

Richard Hunt has had many gallery showings in both Canada and the US, as well as private commissions. In 2004, he received an Honorary Doctorate from the University of Victoria (the same degree was given to his father, Henry Hunt, in 1983). Richard has also contributed many hours and his artistic talents to various charities, including Big Brothers Big Sisters Victoria, Canadian Diabetes, and Orcas in the City for the Lion's Society of BC.