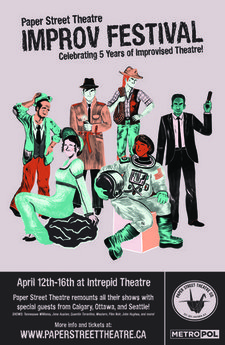 Celebrating 5 great years of improvising in Victoria, Paper Street Theatre is producing a Festival of Improvisation! We're remounting our past shows and inviting friends from Calgary, Ottawa, and Seattle.

The festival will include 5 nights of performances with two shows a night and late night performances on the weekend. Tickets for individual nights go on sale mid-March, but festival passes are on sale now through March 11th for only $50 – that's a $25 discount!