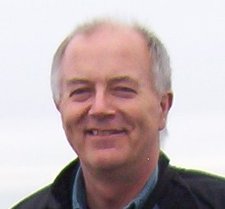 Born in Greenock, Scotland in 1949, came to Victoria in 1957. Schools – Sir James Douglas, Central Junior High, Vic High (’67), UVIC, U of S, Saskatoon. Took accordion lessons at Bernie Porter’s, played trombone in junior high band. Sang at a few hootenannys at the Secret Coffee House in the early ‘60s. Played guitar in a short-lived band called the Quagmires with Danny Lewis and his late brother Dave Lewis, and, if memory serves, Britt Hagarty, whom I had known since grade 3. Britt later said I should try out for the Blues X Five, who needed a guitar player. I remember auditioning for the part, fingerpicking and singing Dylan’s Boots of Spanish Leather and Norm MacPherson remarking that I sounded like Pete Seeger. Not very bluesy, but I soon learned what a 12 bar pattern was and how to play the Memphis beat (and the drums when Britt got up to sing Li’l Red Rooster) and the electric 12 string in some Byrds numbers. I have very fond memories of those times and Norman, John, Britt and Ed. After the Blues X 5, I didn’t perform for a long time. I learned to play some harpsichord and piano and took a few jazz lessons from George Essihos and composed a few pieces but didn’t perform until the late ‘70’s and 80’s. I had started to study classical voice at the Victoria Conservatory, sang in the Music Festival and then got into the Pacific Opera chorus, later landing a few small roles, then got into the Victoria Gilbert & Sullivan Society and began singing lead tenor parts. I got into oratorio and sang parts including being the tenor soloist in Beethoven’s 9th Symphony with the Vancouver Island Symphony. For the past few years I had been working in Vancouver and commuting back to my family in Victoria on weekends. This made performing difficult since rehearsals were usually on weekdays and performances on weekends. Since moving back to Victoria I have been singing in Capriccio vocal ensemble. For fun, I have been learning to play celtic music on the pennywhistle with the Victoria Fiddle Society and Daniel Lapp’s Folkestra.

I was sad to learn that Britt Hagarty passed away. I remember him as being a melancholy artist, even in grade 3. I don’t know if you know how he got his name. He used to be Daniel Hagarty, but one day he saw an article in the newspaper on the Rolling Stones. Because of a typo, Brian Jones was called Britain Jones. Dan thought it was a cool name and became Britton.