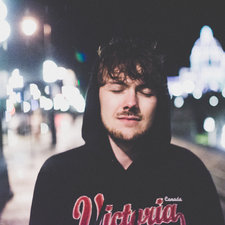 Hailing from the open skies and minds of Victoria, BC, 20-year-old Canadian singer-songwriter and guitarist Sam Weber has gone from strength to strength with gigs and EP releases that have caught the imagination of listeners and media across the world. His ambitious, masterful debut full-length album Shadows in the Road is the culmination of years already spent intensely focused on gigging and recording.

Shadows in the Road is an album of intense contrasts, emotional entanglement, and mercurial, enthralling arrangements. Comparisons and contrasts are admittedly a glib exercise, but if you, dear reader, require them, then Weber channels the raw simplicity of early John Hiatt and Bruce Springsteen, while maintaining the gentle emotive grip of acts like Bon Iver and Bat for Lashes.

In 2012, at age 19, Weber was one of the youngest people to ever be covered in a major Guitar Player magazine feature. “Weber’s expansive blend of driving rock, dream pop and roots influences is a testament to fierce ambition,” said Guitar Player editor Anil Prasad. “The singer-songwriter and guitarist is already an expert tunesmith, brimming with addictive, adventurous and confident pieces. Infused with deep wit and wisdom, Weber’s output is truly impressive. His guitar work is also killer, full of nuance, soul and a truly unique voice. This is an artist built for the long-term. We’ll be hearing a lot more from Weber in the coming years, and more than likely, decades.”

The prestigious Berklee College of Music also saw Weber’s incredible potential, awarding him a summer scholarship when he was 17. The school went on to award him a full-time scholarship, but Weber’s artistic instincts proved too restless and he returned home to Canada to pursue his songcraft.

In addition to his solo work, Weber plays with the celebrated Canadian indie rock act Jets Overhead. As part of the band, Weber has enthralled audiences, opening for the likes of Sam Roberts, The Tragically Hip, Said the Whale, Current Swell, and Stars.

Weber’s journey is just beginning, and it’s off to a truly inspiring start. We invite you to jump onboard and check out this amazing talent during his “early era.” We’re confident Shadows in the Road is a classic in the making. We’re sure you’ll agree.
Learn more about Sam Weber at: