On the road with Cambridge 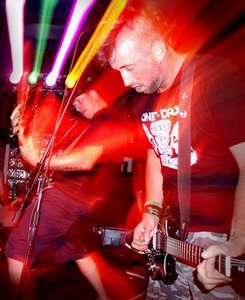 Cambridge has been prominent in the Vancouver punk scene since late 2005. Tour is nothing new to them; this is their second cross-Canada run. The first one went quite well up until a breakdown in Brandon, Manitoba caused them to miss some shows and spend their remaining funds on a blown transmission. This year’s Call To Arms Tour would have more twists and turns than that before it even began. Two weeks before take off, their drummer, James had a family emergency and wouldn’t be able to join them on tour. Luckily Guff from Loose Tooth jumped into a pair of shoes marked Cambridge, learned a bunch of their songs, took a bunch of time off work and rocked the fuck out. I wish I could report that the problems ended there, but on the morning of the first show in Ontario, Paul (bass player) crashed on his longboard, breaking his collarbone. This meant Eric dropped guitar to pick up bass duties, and a four piece became a three piece with a newly acquired gimp to run merch. Less than two weeks after the spill, Paul was turning Cambridge back into a four piece, and Eric was once again strapping on his guitar. The only unaffected member of the band was Jesse, who plays guitar, sings, and is the man interviewed right here.

Denis: How many shows in how many days?

Jesse: It’s gonna work out to be about 30 shows in 40 days. We’ve just finished up a stretch of 10 shows in 10 days in 10 towns from Trois-Riviere, Quebec to Chatham, Ont. and points in between.

Denis: Where are you right now?

Jesse: We’re in London, Ontario and our show just got cancelled. Shitty. So I guess it’ll be 29 shows in 40 days.

Denis: Why do you guys choose to tour in the autumn rather than the ever-popular summer months?

Jesse: We’re suckers for punishment. Kids are back at school, and the University towns are more populated. We seem to have more money after working all summer, and it’s always seemed like a good time for us to go.

Denis: I always find anytime I'm on tour no matter with what band, the crazies all seem to come out of hiding. You meet any real crazies on tour?

Jesse: Oh yeah, the crazies always find their way out. At our show in Timmins, Ont. there was this walking Eyebrow at the show who was cracked out of his mind. He had apparently spent some time in Chilliwack, and could not stop bragging about the 'Wack’. We tried to tell him that we were well aware of the joys of Chilliwack, but he didn't care.

Denis: I met a guy who pierced his eyebrow with one of our band buttons, right there at the bar!

Jesse: In Montreal, we met this crazy old dude, who was the self-proclaimed "third hardest hitting drummer in the world" because Jimi Hendrix once told him that. Then he told Guff that he thought he was cute. Then he made me spill a 40 of 10.1% and wasted a joint.

Denis: The crazy old guys always seem to have a thing for drummers. Is your back sore from sleeping on random floors yet?

Jesse: It was this morning. First time though.

Cambridge returns home to Vancouver on Nov. 14th when they will play with Blacked Out and Raised by Apes @ The Sweatshop. Posted: Nov 5, 2008
In this Article Artist(s) Cambridge