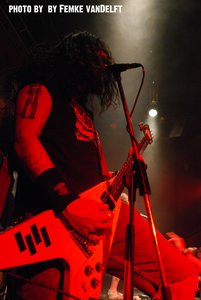 Over a pitcher of Molson Canadian at the Princeton Pub, while a startlingly able roots-rock ensemble hosts the open stage night behind our table, we ask Bison’s vocalist-guitarist James Farwell how he feels about his band’s recent signing with Metal Blade Records, a highly significant accomplishment in Vancouver’s thriving hard-rock/heavy-metal scene.
“It’s a nice surprise,” Farwell nods. “We accidentally acquired management, which is entirely new for me as a musician. Mark Kesten of Frontside Promotions approached us and wanted to work with us – we got drunk with him, he seemed like a really nice dude, and it’s been going really well. He said: ‘give me a list of record labels you’d be interested in working with,’ and Metal Blade was one of the very top picks. And he made it happen.”
Turns out Bison was an easy sell to Metal Blade; the Vancouver-based power quartet had been receiving much positive high-profile international press (Kerrang, Metal Hammer, and Rock Sound magazines, to name a few) for their debut 2007 album Earthbound when initial negotiations were underway. Also, Metal Blade’s Canadian representative Sarah Lutz, who happened to be in Vancouver one fateful night, witnessed Bison’s larger-than-life live assault in their high-decibel element – nipple-length Strathcona beards dripping with hot sweat, overdriven guitars giving Matt Pike a run for his malt-liquor money, Farwell glaring out into the nightclub murk behind his fogged-out spectacles, howling anthems against the world yet for the people – and she was suitably agog. The bottom line: the ink’s barely dry on a 5-album recording contract and Bison’s sophomore release Quiet Earth hits the stands September 30th, riding the tsunami which is Metal Blade’s immense trans-Atlantic promotional machine. Now the whole world can be just as cool as us Vancouverites.
“For this album, we had most of it written before we went into the studio earlier this year. We ended up finishing one song in the studio…something I’ve never done before. It was a little strange, but it worked out for the best. There was a little bit of pressure towards the end of the recording process. By the time we were recording, we knew we were doing the album for Metal Blade, and it’s an entirely different thing when someone’s investing a lot of money into it. It makes you…not over think the music, but you kinda stand back and realize you’re responsible for more than just yourself.”
Which is not to say that Bison were ever victims of the sort of stereotypical old-school high-handed upper-management bullshit from out-of-touch industry fogeys (Farwell, we don’t hear a HIT here!). “Absolutely not,” Farwell confirms. “We wrote our songs ourselves and we have complete artistic control over our work. All Metal Blade said was that they liked Earthbound and they wanted us to make a good metal album. They didn’t want us to make a folk album…although they were okay with the cello and violin that appears here and there...”
It is then pointed out to Farwell that heavy metal is indeed folk music, if one is a fan of Sam Dunn’s documentaries. “Absolutely,” Farwell agrees. “Just like punk rock is folk music.”
Bison has been added to the lineup for Exclaim! Magazine’s cross-country Aggressive Tendencies tour with Baroness and Genghis Tron - which Farwell is looking very forward to. Plans are also afoot for tours of both US coasts, which should keep Farwell & Co. busy through November. As far as any local stampedes from Bison, if you’re reading this, you either went to their August 15th Biltmore Cabaret show (with Sorcerors) and loved the shit out of it…or you missed it, you fucking chowderhead. Now you’ll have to wait until their Thursday October 2nd homecoming show at Pat’s Pub. Pay attention next time.
“We’re going to Victoria to play Rifflandia, which is a citywide festival sort of along the lines of the Sled Island festival in Calgary, and we’ve been asked to play an after-party for this year’s Victory Square Block Party. And we played the Green Mountain Music Festival in Nanaimo! It was absolutely one of the most wonderful experiences of my life. Really good vibes, really good cause, the organizers were charming as hell, and it’s outdoors! You’re playing outdoors and surrounded by mountains, and the sound was really great. Mostly Vancouver bands, too! It was really well put together. Really awesome.”
Farwell muses on Bison’s suddenly accelerated schedule. “It’s to the point now where we have to maybe quit our jobs so we can go on the road - ha ha! Wouldn’t that suck?” Like many in the Strathcona brigade of Vancouver’s music community, Farwell has been a social worker in the Downtown Eastside for the better part of a decade. “I could use a break,” he admits. “And when you have momentum like we have right now, you need to buckle down and go with it.”
A founding member of notorious skater-metal hooligans STREETS, Bison emerged as a fully-functional rock machine in its own right following a booze-sodden summer of Farwell drowning his crushing post-breakup depression. Shutting himself off from the world within the solitary confinement of his bedroom, his trusty Gibson SG across his knee and Jim Beam bottle on the nightstand, his razor rusting and forgotten as his beard vined its gnarly way down his chest, Farwell ignited his new muse. Riff after riff sprang into song after song and by Autumn 2006 the beast of Bison was noisily trampling Vancouver gigs under cloven hoof and snorting steam.
“Things have been flying fast and furious since Bison got started,” Farwell notes. “By the time I recruited the other guys, I already had a strong cache of good songs in the bag. I explained the Bison vision, they were all on the same page, and happy to be there, and everything’s been shooting along ever since.”
If Farwell had the chance to play 200 nights a year, would he?
“Absolutely.” Posted: Sep 22, 2008
In this Article Artist(s) Bison