“Fergot Mu' Biscuits:” On the Deathstar Tour with The Pack A.D. (Part One!) 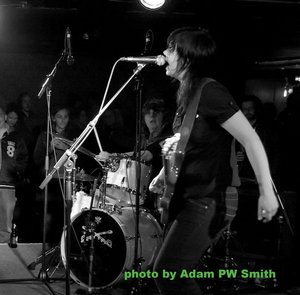 These gals...crazy. Vancouver to Toronto for a single gig. Fly home. Immediately pack the tour van. Cross the border at night. Drive 15 hours to a poorly attended Monday night show in Denver. Who does that? The Pack A.D., mofo, that's who.
For the unconverted, they are two girls – Becky Black, vocals/guitar, Maya Miller, drums – funnelin' gritty hard-ass blues rock, somewhere in the key of Black Keys with hookier hooks, quiet-HUGE dynamos, volcanic drums, slide guitar fury and wailing, spine-tingling, one-in-a-million vocals with the power to explode minds (like Scanners). For three weeks, I get to dig it every damn day on the Deathstar Tour. The Falcon, our semi-luxurious, refurbished American cube van (my new home) picks my ass up in Seattle. All goes well, we pick up merch from Stefan in Gravelroad. Me and Stefan will later form a gay hip-hop duo (next ish!), but for now it's just me, the gals, and the road...
Day One. Music is amazing. I-pods are amazing! Good lawd. Deep, deep blues on the juke. Blind Willie Johnson. Mississippi Fred McDowell. Junior Kimbrough. The Sonics. And soundtracks! Becky and Maya know film soundtracks. Lotsa Jap anime, Blade Runner, Michael Nyman. I naturally bring the 70's riff rock. It's like a music store. The scenery is beautiful. Desert, snow, the Rockies, gas stations. In Denver we meet American Relay, another duo - and one of the best bands we'll see all tour. At their friend's place we enjoy a wonderful Monday night feast. We're all exhausted, needing naps, but instead the girls take the stage, summon the apocalypse, and rock the fuck outta 10 people in Denver.
Um. So... this is the touring life? Feel like walking excrement all day, then spill your guts out till you're dead. Then pack up and drive ten hours to Austin. Okay, okay, I see how this kills people.
South by Southwest. The Mecca. I'm here, fuckers! Right in the epicentre. I've got my wristband, my useless wristband. Everywhere you look it's rock'n'rollers. Wednesday afternoon before SXSW begins, there are 99% rockers on the street and 1% other people. Even the cab drivers rule, big black brickhouses and grizzled old country boys and lanky zombies schooling us in piano theory.
We made the weird error of hoteling just out of town centre. The first two people we meet are transvestites. The Pack's label (Mint Records) are smartly centrally located, right next door to gig #1, the Canadian Blast BBQ. Like most gigs at SXSW, there's no thematic rhyme or reason to the billing. It just is. The Pack explode more heads. Afterwards, Dave Gowans (Redcat Records proprietor) graciously loans me his computer while Maya and Becky get uncharacteristically piss drunk. We all boogie drunkenly at the Canadian Hip Hop Explosion. Zulu! But we only got 2 ½ days, and musical treats are few. The schedule is so busy, doing interviews (an obsessive Toronto writer drives us miles to unsuccesfully shoot handguns), plus four shows. Mostly we just push gear around on hotel carts.
6th Street at night as just one sweltering mass of endless rock. A hundred venues, packed. With no gameplan at all, we catch Capsula from Buenos Aires, a balls-loose freakrock thing with a twiggy Iggy, raven-haired Nico and Japanese Wayne from Wayne's World. I also catch the original Blue Cheer (!) and crap myself. Absently stumbling onto a jam-packed Ravonettes show, I overhear the Pack A.D.'s 'All Damn Day Long' rockin' the PA! Ha!
The daytime Mint / Six Shooter Hootenanny is a barnstormer. Can't believe how much harder, grittier and ballsier the Pack are then all their cutesy, lovely labelmates (no offence!) - Mint is super-nice and treats me like part of the gang. Me and the gals enjoy an extremely costly prawn, crab, & crawfish pig-out at the Boiling Pot, where waitresses dump food on your table and you shovel it like an animal.
My Austin highlight is at the Nail Distribution gig. 15 minutes to showtime, me and Becky make a mad-dash for the fabled free cigarette/burrito/beer exchange (a complete debacle). On our return, grabbing my first afternoon beer, I overhear a man pleading his kids' way into the bar. They drove five hours from Ft. Worth specifically for the Pack A.D.! What? I speak to one kid at length – this band is evidently, for him, “that band”, his singular mind-poppin' guiding light. His wide-eyed enthusiasm was refreshing and infectious. Jesus – here I am, David Bertrand, rock'n'roll fanboy, traveling the world with one of my favourite bands in the whole wide world. The kids got Becky & Maya to sign their undershirts and gave Becky a pick, which she plays that night at the Mint Records Showcase (dad swindles his kids into that gig, too!). Rock'n'roll heaven? Yes, I think so.
So it's 3:30am on Friday night in Austin, deep in the belly of every music fan's Mardi Gras. Naturally, it's time to pull out for a miserable drive to Buttfuck, Kansas. More next time! Posted: May 6, 2008
In this Article Artist(s) The Pack A.D. Resource(s) sxsw

Modern indie/alternative from Victoria BC

jive, swing, jazz from Victoria BC

The first-class Charlie White Theatre is known as one of the...
Open / Operational