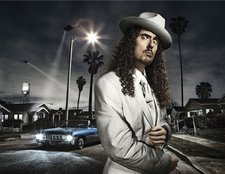 The "Weird Al" Yankovic story begins in Lynwood, California where young Alfred Yankovic honed his musical skills on the accordion his parents purchased from a door-to-door salesman. Al first exhibited this talent in 1979, where as a college disc jockey he recorded "My Bologna," a spoof of The Knack's "My Sharona." The song became a sensation on radio's nationally
syndicated "Dr. Demento Show" (where Al subsequently recorded his live version of "Another One Rides The Bus"). And thus the die was cast. His legacy of music and ground-breaking videos, include parodies such as "Eat It," "Like A Surgeon," "Fat," "Smells Like Nirvana," "Amish Paradise," "Couch Potato" and "Trash Day."

"Weird Al" Yankovic, is the undisputed top dog of musical parody. He has is a 3 time Grammy Award Winner amongst nine nominations, four gold records, and six platinum records in the U.S. A significant part of the Weird Al experience is his live performance. The show is a multimedia extravaganza featuring Al and his band performing songs spanning his illustrious career, in many cases simulating his music videos on stage with elaborate costume changes.