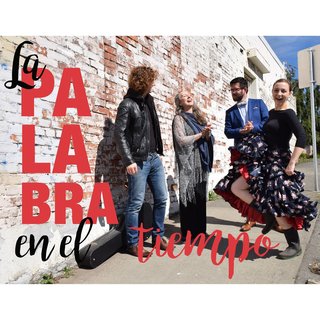 https://denisejy.wixsite.com/palabraflamenco
Flamenco Dance, Song, Guitar, and Poetry from Victoria BC

La Palabra en el Tiempo is a phrase from Antonio Machado, humble poet, philosopher, and “old-fashioned school teacher” from Andalucia, Spain. The phrase has been translated many ways: “the word in time,” “human language in which we feel time passing,” or “words that pick up the energy of time,” or “words that take their place, like drumbeats, in time already counted.” These words are related to flamenco: tiempo is the compás, palabra is the word, spoken, sung, strummed, or knocked out on the floor by a shoe. “Form your letters slowly and well: making things well is more important than making them.” In this performance, singer, poet, guitarist, and dancer each attempt to express “one or two humble words” in el tiempo with hope they may be common earthen jugs beside the stream.

Flamenco is inherently an improvisational art form comprised of guitar, dance, and poetry as song. One of Palabra Flamenco's unique features is the use of English rather than Spanish poetry, spoken and not sung. Poet Garth Martens performs new work in the flamenco context. Palabra Flamenco reminds us what flamenco can mean in this time and place. These artists attempt to excavate human shadow. The shadow is long. It belongs to individuals, village, and nation. As well, this performance includes joy, mockery, humour, sunlight: conscious and celebrated tools to reclaim ourselves whole and human.

Denise Yeo is a flamenco dancer and palmera out of the Alma de España Flamenco Dance Company & School in Victoria, B.C. under the tutelage and mentorship of nationally acclaimed dancer and choreographer Veronica Maguire. Denise has trained with international flamenco artists such as Concha Jareño, Domingo Ortega, Maria Bermúdez, Inmaculada Ortega, Antonio El Farru, Carmen Herrera, Ana María Lopez, Esther Aranda, Manolo Marín, Emilio Ochando, Ricardo Lopez and Luis de la Tota. In North America, Denise has trained with award-winning dancers Carmen Romero and Oscar Nieto, as well as musical training under Vicente Griego. By special invitation Denise has performed as a dance corps member in two major productions, Recuerdos and Pasajes. As a soloist she continues to perform in Vancouver tablaos and tablao productions in and around Vancouver Island. As a palmera, she has performed with Gareth Owen Flamenco in solo concerts, a recorded album and with special collaborations. She's also been invited as palmera for Kasandra Flamenco's production, Encuentros.

Gareth Owen is a world-class flamenco guitarist. He has shared the stage with international flamenco guitarists Jesus Álvarez and Gaspar Rodriguez Roman, and has accompanied international artists such as Coral de los Reyes, Miguel Rosendo, Luis Vargas “El Mono”, María Bermúdez, Domingo Ortega, Luis de la Tota, Gema Moneo, Ricardo Lopez, Emilio Ochando, Cristina Hall, and Vicente Griego, among others. Canadian collaborations include Oscar Nieto, Kasandra Lea “La China”, Gerardo Alcalá and Carmen Romero. Gareth continues to collaborate with his mother, Veronica Maguire, and had his beginnings with his father, renowned flamenco guitarist, the late Harry Owen. Gareth has recorded two albums Gareth Owen Flamenco Guitar and El Cobre with Antonio de Jerez, with a third in production. Solo concerts include those at the Calgary International Flamenco Festival, in Victoria at the Alix Goolden Hall and St Andrew’s Presbyterian Church, and in concerts presented by the Arts Council of Haida Gwaii. Tablao performances include El Laga in Jerez de la Frontera, Spain, and others in Canada. He has been a guest artist in the Toronto International Flamenco Festival, Vancouver International Flamenco Festival, Dawson City Music Festival, Victoria Flamenco Festival and in large-scale productions such as Encuentros and Café de Chinitas in Vancouver, and Recuerdos and Pasajes in Victoria.

Dancer, choreographer, and singer Veronica Maguire is the artistic director and co-founder of Alma de España Flamenco Dance Company and School, established in 1991 in Victoria. In a career spanning over forty years she has taught and inspired many students, some of whom have gone on to cultivate their own professional careers. Veronica has shared the stage in Canada with Spanish international flamenco artists María Bermúdez, Domingo Ortega, Jesus Álvarez, Coral de los Reyes, Miguel Rosendo, Luis de la Tota, Antonio de Jerez, Inmaculada Ortega, Sonia Berbel and Matias Lopez Exposito. North American artists include Oscar Nieto, Gerardo Alcalá, Esmeralda Enrique, Paco Pedrosa “Jiménez Carancha”, Carmen Romero, Chuscales Jose Valle, Vicente Griego, Kasandra “La China”, to name a few. Her longest and dearest artistic partnership was with her late husband and acclaimed guitarist, Harry Owen. Veronica continues to stay connected with her adopted hometown of Jerez de la Frontera in Spain, a touchstone for continued growth and inspiration. As a result she has produced and directed world-class productions in Victoria such as Recuerdos in 2011 and Pasajes in 2014. Veronica has performed in the Vancouver International Flamenco Festival, Dawson City Music Festival, Victoria Flamenco Festival, as well as many other major performances throughout Western Canada, including the Dancers for Life Gala as guest artist in a show that featured Karen Kain, Evelyn Hart, and Rex Harrington, and as a featured guest artist with the Victoria Symphony under the baton of Kees Bakels. In 2013, Veronica received a Canada Council grant for Professionals and was chosen by peer assessment to win the prestigious Jacqueline Lemieux Award for her contribution to Dance in Canada.

Garth Martens won the 2011 Bronwen Wallace Award for Emerging Writers. His first book Prologue for the Age of Consequence (House of Anansi Press) was a Finalist for the 2014 Governor General's Literary Award in Poetry. His poems have appeared in Poetry Ireland Review, Hazlitt, This Magazine, Vallum, Fiddlehead, Grain, Prism International, and Best Canadian Poetry in English 2014. In collaboration with Alma de España Flamenco Dance Company, he wrote and performed the libretto for Pasajes, an international production staged in 2014 at the Royal Theatre. Martens has served as Literary Coordinator at Open Space for Open Word: Readings & Ideas, and on the Editorial Board for The Malahat Review. His chapbook Remediation is forthcoming with JackPine Press in 2018.

My Patio Life
by  Cheryl HOOSON