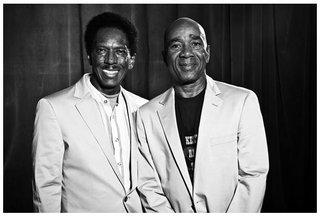 Keith Rowe and Philip “Tex” Dixon were two suburban Kingston kids who wanted nothing more than to make ska music. Originally two members of a five-person vocal group, the lads were turned down by Jamaica’s top producers of the late 60s, Coxsone Dodd, Prince Buster, and Duke Reid. Dejected, the other three vocalists quit, but Keith and Tex stuck with it. It was Derrick Harriot who gave the duo a chance in 1966, when the pair recorded a handful of singles such as “Stop That Train” and a cover of the Temptations’ “Don’t Look Back”. The tracks were instrumental in ska’s evolution from its bubbly beginnings to its soulful second form, rocksteady. “Stop That Train” and a second single called “Tonight” proved to be hits on Jamaican radio and Keith and Tex became staples of the Kingston scene. Despite this, Keith and Tex broke up in 1970, moving their families to the USA and Canada respectively. However, while they were apart, reggae and ska became a worldwide phenomenon thanks to superstars like Bob Marley.

For 24 years “Keith and Tex” was just a name on a record in the reggae section at the local record store, but in 1994, the duo reunited and have been intermittently performing and recording since. They released the aptly titled comeback album Together Again in 1997, and followed it up recently with 2013’s Redux and 2015’s Just Passing Through. They will be gracing us with a gorgeous sunlit performance on July 3rd where they will be backed by legendary Brooklyn ska/reggae group The Slackers for a one-of-a-kind show.

In this Video Artist(s) Keith and Tex
Posted: Mar. 7, 2017
Submit info on this to our admins