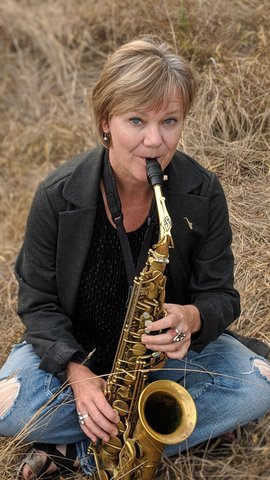 Saxophonist Monik Nordine has received several prestigious arts awards including a Juno Award nomination for her work on the album Cruel Yet Fair (1997) with John Korsrud’s Hard Rubber Orchestra and has toured with Hugh Fraser’s band VEJI.

Along with Victoria musician Jon Miller, Monik is facilitating the newly formed Left Coast Jazz Festival. In past years she directed the Saltspring Jazz Fest as well as the concert series “Jazz at the Acme” in Nanaimo. She is now busy with The Monik Nordine Trio and The John Miller Quartet and has recorded three albums as a leader: Not Just To But Over the Moon (1998), Departure (2010) and The Old-New Town (2017).

In 2016 she was commissioned by Vancouver Island University to write for the VIU Jazz Ensemble.

Puttin' on the Ritz

In this video: Monik Nordine + Adam Brody
Posted: Feb. 9, 2015
Submit info on this to our admins