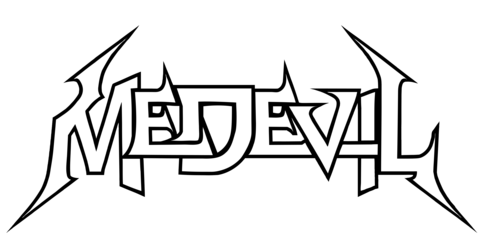 Heavy Metal from Chilliwack BC
http://www.medevilmusic.com/

Medevil is a highly energetic, fast-paced metal band known for their tight songwriting, intense stage presence and roaring vocals. They are one of the few metal bands coming out of Chilliwack BC, and hold that title proud as they have earned much praise and respect since their inception in 2014. As one of the 6 finalists of the Wacken Metal Battle Canada, they are becoming more and more renowned throughout the country; their fame attaining them a following in their local town and across through to Vancouver.

Their music could be described as "power thrash" with half of their set being chorus-driven, and the other half focusing on blistering fast riffs. Influences for the band include Iron Maiden, Megadeth and Metal Church. Their fast but catchy songs keeps the crowd chanting throughout the set, and leaves them wanting more. Liam Collingwood, the band's singer, keeps the band image in-theme with the songs while on stage, and will wear thematic outfits when the mood demands it.

The band was founded January 13, 2014 by Eric Wesa (bass), as well as brothers Liam (vocals) and Ross Collingwood (drums). It only took two months after the band's inception before the boys found the ultimate guitar duo they were looking for, Gary Cordsen and Brett Gibbs. Once the lineup was solidified, they wasted no time to perform shows and begin their musical journey.

As a band, Medevil has two common goals; to explore their musical talents, and continue performing live for their fast-growing fanbase.

In this video: Medevil + Michael Kvicinsky + Jakub Kvicinsky
Posted: Sep. 3, 2016 via LiveVan.com
Submit info on this to our admins