Tanya Stephens is that rare outta order gal pickney who’s proved to the dancehall frat that she’s meant for more than decorating men’s rhymes with smooth background harmonies. Gangsta Blues, Tanya’s fifth CD (VP Records), is raw, rebellious, and authentic, confirming her position at the top of the dancehall game with a vivid display of her wide-ranging musical imagination and keen wordplay. Whether spouting hardcore racy rhymes, insightful political statements, or crooning heart-tugging romantic fables, only gutsy power bolts come from the throat of this giant talent.
Vivienne Tanya Stephenson’s career kicked off like so many others, free-styling with her crew on the corner. As the second to last of seven kids, her musical influences were determined by “whatever everyone in the house was listening to.” It was a mixed bag, including Smoky Robinson, Buddy Holly & the Crickets, American R&B, her mother’s “suggestive calypsonians, like Kitchner and Sparrow. That helped me develop wit,” Tanya recalls. “I discovered what they were talking about at a real early age.” Singing on the mic at local sound system dances completed her musical education and it wasn’t long before she recorded her first track, ‘93’s “Is This For Real.” Included in producer Barry O’Hare’s Further East compilation, the tune announced the presence of a certified maverick within a business heavily populated by musical mavericks. “O’Hare’s really a musician, more melodic and musical,” says Tanya of the Ochie-based producer. “If I had gone to Kingston first, I’d have just have jumped on a riddim.” O’Hare produced her first album, 94’s Big Tings A Gwan, which set off a string of boomshots - the title track, “Love How Your Body Tan,” “Kick Way,” and “I Bet You Miss Me” - and established Tanya’s as an aggressive competitor armed with a gorgeous, rhythmic alto and a scathing wit.
Daughter, Kelly, arrived the same year, but motherhood was a motivation, not a hindrance. Tanya’s next CD, 1997’s Too Hype - a compilation of Tanya’s hit singles and new tracks that were actually demos, ”slipped" past her stringent quality control as it was released without her consent “and I couldn’t find the producer.” Yet it contained initial recordings of “Goggle” and “Yuh Nuh Ready (Fe this Yet)” - hilarious yet commanding statements of female sexual empowerment. Tanya had more input for 1998’s Rough Rider, a goldmine of hits that yielded “119,” “Part-time Lover” (a bow to Stevie Wonder but entirely Tanya’s), “Think It Over,” “Man Fe Rule,” and “Draw Fe Mi Finger.” For the writer/singer of tunes like “Big Ninja Bike,” an exuberant deflation of men who don’t deliver on sexual promises. Tanya is about “trying to bridge the gap between men and women and puncture the myth that it’s a man’s world,” she explains, adding “I have no problem being a woman - I love it.”
Tanya’s latest effort, Gangsta Blues, produced by her work partner, Andrew Henton, and released on VP Records - were culled from an extended creative explosion that followed her return from 3 tepid years in Sweden (1998-2001), where she recorded alternative rock tracks for Warner Sweden. “I missed dancehall so much that since I came back, I’ve been in the studio every day, asking everyone `Don’t you have a riddim?’” Tanya says. “It’s like therapy. I developed a lot more appreciation for the freedom of dancehall. It can be a bit tiring with the same topics - sexual limitations and gay bashing - but they’re opening now to more topics.” 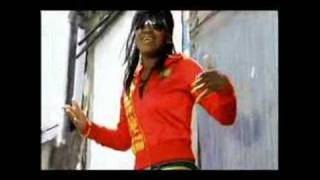 In this video: TANYA STEPHENS
Posted: Jun. 6, 2013
Submit info on this to our admins