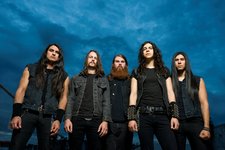 Like many of the legendary bands whose influences they wear on their tattered sleeves, the Los Angeles quintet HOLY GRAIL made an immediate impact when they exploded onto the metal scene in 2009. Here were five immortal men who fought to kill, armed with an infectious sound – a mix of classic heavy metal and modern sensibilities – sure to win over even the most jaded of cynics. As if on cue, metal media around the world swooned immediately. Metal Hammer UK nominated HOLY GRAIL for their “best new band” Golden Gods Award based solely on the two original tracks that appeared on their debut EP “Improper Burial”, while the group was invited to perform at major worldwide events such as the Wacken:Open:Air (Germany) and Download Festival (UK) before their full-length debut was even finished being recorded. When their full-length debut “Crisis In Utopia” was finally released in late 2010, it was clear from the opening notes on that HOLY GRAIL’s music is their silver bullet. The album reasserted the group’s potential and earned the band a new round of critical acclaim, with Revolver Magazine naming the release one of 2010′s Top 20 albums. Hereafter, the group hit the road for a nearly two-year touring cycle during which guitarist Alex Lee (ex-BONDED BY BLOOD) joined the fold and the band performed alongside the likes of BLIND GUARDIAN, ELUVEITIE and DRAGONFORCE, among others. In addition, they further developed a burgeoning international fan base by touring Japan, Australia and the UK.

If “Crisis In Utopia” hinted at what HOLY GRAIL could achieve, new album “Ride The Void” shouts it through a megaphone. Gone are sword-and-steel odes to Valhalla; in their place are morbid tales of serial killers. Indeed, producer Matt Hyde (SLAYER, CHILDREN OF BODOM) brought out a darker, hungrier side of the band than many have heard to date – yet musically, they’re more exhilarating than ever: Witness the galloping riff of “Dark Passenger”, the betcha-can’t-play-this exuberance of the opening lick of “Too Decayed To Wait” or the unexpected triumphant and melodic solo in “The Great Artifice”. Perhaps more importantly, the album sees HOLY GRAIL continue to expand the limits of their sound by incorporating classical guitar (“Wake Me When It’s Over”), a cinematic, QUEEN-like vocal intro (the otherwise anthemic “Sleep of Virtue”), a trance-like guitar loop (“Silence The Scream”) that cleverly belies the lyrical content it introduces, and a moody finale (“Rains of Sorrow”) inspired by a family member’s battle with cancer.
Someone pretty might catch your attention, but only someone special can keep it. HOLY GRAIL could have easily written an album filled with lovable tales of mead-chugging knights-on-horseback, but instead, they pushed themselves further – and in the end, created an unforgettable collection of timeless metal anthems that not only validates the early praise they received, but creates an exciting question: Where will they go from here? For now, though, buckle up and enjoy the ride! 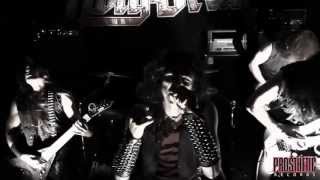 In this Video Artist(s) Holy Grail
Posted: Dec. 25, 2013 via LiveVan.com
Submit info on this to our admins