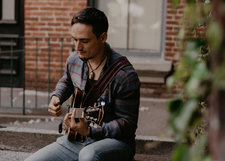 Guitarist, vocalist and songwriter Wes Carroll is dedicated to reaching audiences with his original creations. His writing whisks jazz, hip hop, singer-songwriter and soul into a new kind of froth. He is inspired to write music about social justice themes, surveillance, mental health, climate change and of course, writes love songs too. Wes is a seasoned performer playing in 6 Victoria Jazz Festivals, freelancing in a variety of styles and holding down a regular trio gig at the Empress Hotel in Victoria from 2016-2019. In 2014 he earned a degree in jazz studies from Vancouver Island University and is currently enrolled in the University of Toronto's masters of jazz performance program. With side-projects that include “Wes plays Wes” (a tribute to Wes Montgomery) and the original hip-hop crew “Grapefruit Is Impossible,” it is clear that when it comes to genres, Wes does not play favourites. He has recorded two albums of original music: “Off Pulse Quartet, Live in Holland” (2014), and “Off Empire” (2018) – the Wes Carroll Confabulation’s debut album which peaked at #4 in !EarShot’s jazz category for national campus and community radio plays. Furthermore he was a contributing writer/player for Grapefruit is Impossible's debut hip hop album "Citrus Paradisi" (2019). Wes is looking forward to releasing the Confabulation's second album in the spring of 2020 which features a 6 piece band and a mix of vocal and instrumental music.