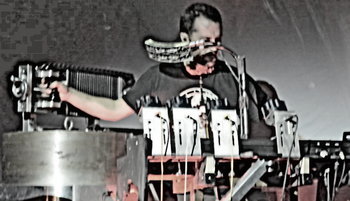 Author & Punisher with Crawling Human, 11 December 2014 at The Hindenburg, Vancouver.

The machinery, resting unattended atop a group of sturdy wooden work tables on The Hindenburg stage, seems innocuous: a massive metal cylinder, which resembles a scale model of a grain bin, is flanked on one side by a gutted keyboard decked with a row of oversized black knobs, and on the other side sits a reconfigured metalworking lathe. As the stage lights switch to red, however, the machines are cloaked in shadows infused with the sort of infernal red glow one would expect to see in a metal foundry (or, for the Star Wars geeks reading this, the carbon-freezing chamber in The Empire Strikes Back). The fact of the equipment onstage quietly affirms the presence (which is an achievement in itself, considering the fickle rulings of Canada Border Services agents lately) of Tristan Shone, San Diego’s one-man industrial/dub/noise band also known as Author & Punisher.

First: From their audience-level position at the foot of the stage, local noise-improv act Crawling Human performs a set of organic, structured improvisations for bass, guitar, and vocalist-with-laptop. Oozing like sap over many minutes, their sounds challenge the listener to discard any expectations of traditionally-structured songs and instead forage for meaning in the spaces between notes. It’s an appropriately idyllic treatment of noise as a freeflowing series of naturally-occuring sounds; a fairy tale of Sound in a state of grace before the rise of music and music-machines.

Nearly a century ago, a concert performed on the first experimental noise machines (Luigi Russolo’s Intonarumori), was so offensive to the audience that a riot erupted. The devices were unique, unconventional and, evidently, intimidating to listeners unaccustomed to the use of noise in musical compositions. Created as both a reaction to industrialization and an appropriation of industrial design, the Intonarumori forced listeners to acknowledge the auditory reality of their newly mechanized age. Author & Punisher is both an object lesson in the evolution of abrasive modern sound/art/music since Russolo as well as the culmination of creative expression through usurped technology.

Shone’s custom-built assortment of “drone machines”, which he also designed himself, recalls the technology of an earlier era, when industrial machines were composed of heavy steel and mechanical parts rather than today’s synthetic materials and electronic circuits. And, unlike a performance facilitated solely by laptop and software, the drone machines have a tangible presence that demands interaction and exertion: Shone climbs within the circle of worktables to execute a complex series of physical movements – spinning the giant cylinder, twisting knobs, and pulling levers. It is a scene visually reminiscent of the subterranean labourers operating machinery in Fritz Lang’s 1927 film Metropolis, with one key difference – rather than the agent of individual oppression, these machines are a means for personal expression.

Dub elements introduced on previous recordings Ursus Americanus and Women & Children continue to evolve, accompanied by new vocal textures that bear some resemblance to the low-grit sandpaper howls of Phil Anselmo (Pantera, Down). The entire set showcases all-new material scheduled for an upcoming release on Housecore Records, co-produced by Anselmo, label founder. Throughout the performance, a large projection screen stretched across the back of the stage displays pale monochromatic imagery provided by CutMod Digital Design: video static with alternating textures akin to liquescent LSD geometries, brushed-steel, and frosted ice; windswept landscapes, a female nude. The elongated shadows of the machines and their operator crosscut the screen’s lower edge like a superimposed frame of German Expressionist film and, viewed from a certain angle, it lends an inadvertently ethereal effect to the performance – the projection of a literal ghost in the machine. As Metropolis anticipated the soulless, repetitive work of mass-production and assembly lines, this slice of human silhouette, caught between the physical, “machine” world and the infinite, virtual plane of information, is a poignant symbol of our own era, for which Author & Punisher provides the perfect soundtrack.

Contemporary Composition/Improv from Victoria BC

Modern indie/alternative from Victoria BC

The first-class Charlie White Theatre is known as one of the...
Open / Operational