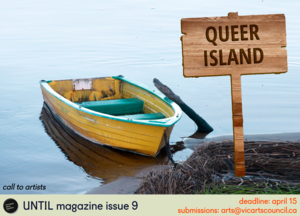 Posted by: Victoria Arts Council
For the upcoming Spring/Summer issue of UNTIL, the theme will be Queer Island with special Guest-Editor David Geiss.

To paraphrase John Donne, No queer is an island entirely to itself; or are we? There exists a Queer Island off the shores of Alaska, another one in southern Ontario, and let’s not forget Fire Island, as well as the short-lived autonomous zone pronounced out of protest for equal rights in Australia. Keeping in mind that queer has come to represent a catch-all with the caveat that not everything can be encapsulated or acronym’d, we are looking for artists who identify as LGBTQIA2S+ to offer their explorations of the theme and its myriad interpretations from the perspective of Vancouver Island and the Gulf Islands.

While some of us grapple with a new concept of isolation, for others it is old hat — maybe even a preference, not to be misconstrued as antisocial or insular. What does it mean to be an Island queer in 2021? How does your queerness manifest in your art practice? Do you invite your audience in to experience the island space-time continuum? Or simply fly your flag on the mountaintop as a beacon for passersby? As the line between queerness and the mainstream blurs further, how do we walk a similar line between island and mainland, between one and the many, and between each other?

Send images as attachments NOT embedded in documents to be considered for this issue of UNTIL… to be published in Spring 2021. With your submission please include:

- Bio (max 250 words)
- Artist statement as it might relate to the theme (max 500 words)
- Title, date, medium, and year of work
- Contact information
- All contributors will receive an honorarium as well as one free annual membership to the VAC.

About the Guest Editor:
David Geiss grew up in the 80s and 90s on a family farm in Treaty 4 territory, and now lives on Vancouver Island in Lekwungen territory. He holds a Screenwriting MFA from the University of Victoria and a Film & Video Production BFA from the University of Regina. His films and documentaries have been seen around the world: Queen City won the Best Documentary Award at the Canadian National Youth Film Festival in Ottawa, and his follow-up docudrama Stubblejumper appeared at several festivals including Inside Out in Toronto; both films were broadcast on OutTV. He received NFB support for the short film Basin which aired on APTN and screened at dozens of festivals including Hot Docs and WNDX. He directed the Back to the Land episode of OutTV’s Leo Award nominated documentary series OutSpoken, along with the canine adventure film Bark to the Land. David has taught screenwriting at UVic, and has programmed for the Victoria Film Festival, Short Circuit Pacific Rim Film Festival, Queer City Cinema Film Festival, and the National Student Film Festival (now the Living Skies Student Film Festival).