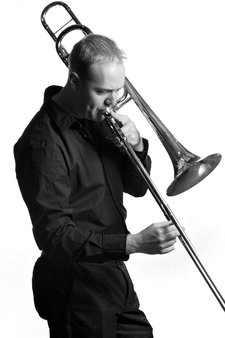 Scott MacInnes, although still youthful, has gathered a sizable amount of musical experiences. Upon finishing his Undergraduate Degree, in Classical Music Performance on the bass trombone at the University of Toronto, Scott free-lanced in the Greater Toronto Area and throughout Ontario, playing with a great number of ensembles, including: the Toronto Symphony, Orchestra London, the Thunder Bay Symphony, and the Niagara Symphony, as well as Hannaford Street Silver Band. Covering numerous styles of music, varying from Jazz, to R&B, to Folk Rock, military band, and big band he was also fortunate enough to play for Royalty (both British and Dutch), the Pope, the Dalai Lama, and many other heads of state. In 2005 the Victoria Symphony hired him to play bass trombone. This experience opened up many other opportunities. For instance, his appointment as the trombone instructor at the University of Victoria, and as Principal Bass Trombone with the Vancouver Island Symphony Orchestra. In addition to these ensembles, he can be seen performing with The Midnights Rhythm and Blues Band, the Pinnacle Brass quintet and numerous other ensembles on Vancouver Island.