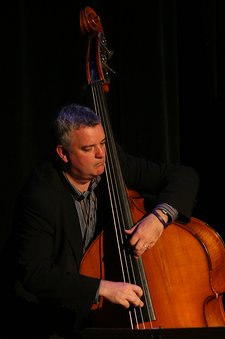 Rene Worst, an internationally known and well respected bass player, has established himself as one of the most influential and leading jazz voices in North America for several decades. He attended the UBC School of Music and Douglas College jazz program and was voted Bassist of the Year by the BC CARAS Tribute to West Coast Music for the 4 years that the awards were given.

Rene was co-leader of the now-legendary fusion band Skywalk with six CD’s to their credit. He has toured Canada with jazz legends Chet Baker, Gene Bertoncini and Joe Pass and on the international scene, has toured the former Soviet Union with Paul Horn.
He is also the bassist with Brazilian band Novo Tempo and multi-disciplinary ensemble Crossing Borders, both bands having toured extensively throughout the US & Canada; he is a virtuoso on both string and electric basses.

Rene Worst has recorded and performed with numerous jazz greats, including Jack Sheldon, Tommy Banks, Herb Ellis, Freddie Hubbard, Ernestine Anderson, John Faddis, Don Thompson to name a few and has recorded and produced 7 CDs for musical partner, Jennifer Scott, one of the top jazz artists in Canada, including the highly acclaimed “ Emotional Girl“. He has also been featured as a session player on recordings by Jennifer Love Hewitt, David Bowie, Aerosmith and Poison, to name a few.
Rene has released a duo album with pianist Miles Black called “Two” – it has received much critical acclaim. Rene’s studio works include jingles, album projects, and movie scores.

As a noted producer, Rene has helmed recordings for Sandy Foster, Megan Fanning, Skywalk, & Crossing Borders.
This current year, Rene has released the Jennifer Scott CD “Storybook” as bassist and producer and was featured on new releases by Keith Bennett and Hans Staymer. As well he released a second duo CD, “El Escorial”, with pianist Miles Black