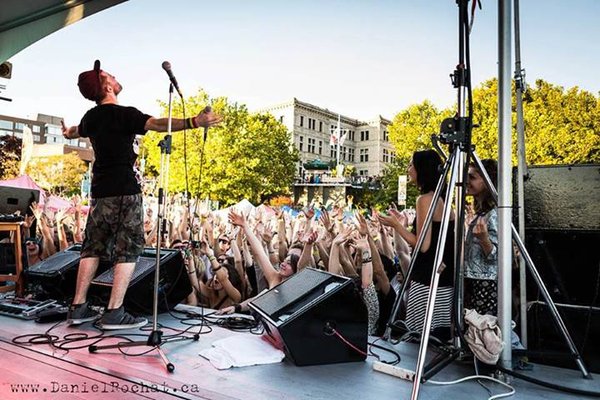 Well, Victoria’s 14th Annual Ska Fest was certainly one for the books. Each year we get bigger and better - 2013 being no exception. We brought in tons of local favourites, brought back old friends from around the world, and showcased many diverse acts and genres. Our expanded site was a welcome change, and the expansion of the Rocksteady Collective into a site-wide project really help spread the Ska Fest spirit. We’ve done a small recap below with some of our favourite moments from the festival.

Tuesday evening was certainly a great way to kick off another year of amazing performances. Local acts Sweetleaf and Hillside Hooligans really knocked it out of the park with some quality showmanship. Later that night both The Revivers and The Debonaires seriously left the crowd screaming for more with two sets of amazing ska, jazz, and soul.

The party continued later at Club 9ONE9 with JK & The Relays, Rocky Mountain Rebel Music, and The Planet Smashers. The groups were a perfect match together, and the energy reached its highest when The Planet Smashers hit the stage and invited along a special guest to dance with us! What an amazing first night it was.

Wednesday kept the positive vibes going at our second free show. Jon Middleton kicked things off with his Vancouver Island inspired roots and reggae music, while Blackberry Wood had the entire audience dancing and smiling. When Sierra Leone’s Refugee All Stars took the stage, the night just became a perfect combination of passion, music, and energy. Their songs of hope, peace, and love really made them a festival highlight and we can’t wait to have them back again.

Once again the party continued into Club 9ONE9 for an Afrobeat party! What started with some of our own amazing talent culminated into a fantastic night with Chicago’s finest!

Our first ticketed harbour show of the festival was certainly one to remember. Tanya Stephen’s really let the audience into her life and shared as much as she sang with us. Our workshop series began earlier in the afternoon with an informative and heartfelt presentation from Blitz the Ambassador, who performed a knock-set set at Club 9ONE9.

With such an amazing start, how could the evening get any better? Following Blitz were two of 3rd-wave ska’s heavyweights. Suburban Legends blew us all away with their bright sounds and choreographed moves. Festival favourite, The Resignators, brought pack the party again with a night full of fun and mayhem.

Friday night was epic! With an exclusive date from Mad Caddies, the newly expanded Ship Point venue was packed with a crowd eager for some ska and punk madness. With some amazing sets from Oregon’s The Sentiments, our own Bocce Avocado, and Vancouver’s Los Furios, the Mad Caddies took the stage to a crowd that could not have been happier to see them back. Being that this was an exclusive play for the group, fans from all over the North-West came out to see this legendary group.

We continued our expanded workshop series with a great presentation from Larry McDonald of The Rocksteady 7, who played later that evening at Sugar Nightclub. Speaking of which, what a show that was. Though J Boog was unable to make it into Canada, David Hillyard & The Rocksteady 7 hit the stage with the passion and energy that only the Victoria Ska Fest can bring. Following them was a PACKED performance from another group we’ve come to love, Katchafire. I don’t think we’ve ever had such a busy evening show as that one, and it was really something to see.

Alright, here we go, now we’re not playing around anymore. Saturday was just one great group after another. Our afternoon show really heated up in the sun with both Freak Motif and The Chantrelles delivering some diverse and groovy music for our last free show of the festival. As the evening came closer, our venue slowly filled with a crowd eager to see some of today’s top talents. David Hillyard & The Rocksteady 7 played another solid set, being energized from their previous performance at Sugar. Following them was Dub FX. Though his baggage and equipment had been lost en route, he performed what was an INCREDIBLE set for us. He performed with Andrew Murgatroyd of Rocky Mountain Rebel Music, truly making this something special for the crowds of Victoria’s 14th Annual Ska Festival.

With what was an already stunning evening of music, Yasiin Bey hit the stage and quickly drew the crowd in with his passionate, insightful, and raw lyrical talent and energy. It was something special to have an artist of his calibre perform on our stage, and with Bey performing a few reggae tracks including an acapella rendition of “Bam Bam” by Toots and The Maytals, it was really the type of performance that makes Ska Fest so special.