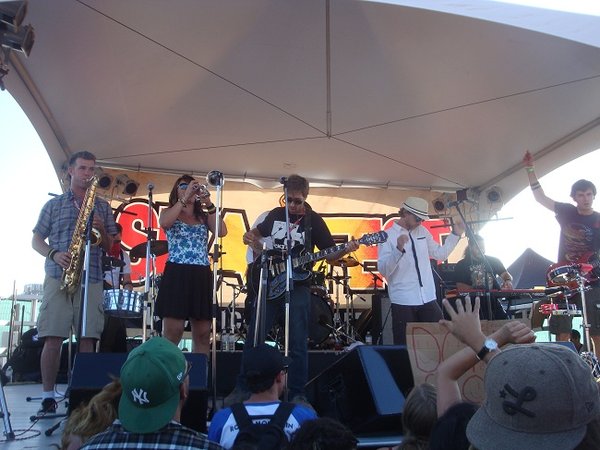 I remember the last time we played the festival, we were playing outside. I was walking back to the hotel. I ran into this older guy who had seen us play. He told me how the Slackers reminded him of Bill Haley and the Comets. He didn't know what ska was. He just liked the way we sounded.

Here are some of my many great memories of Ska Fest over the years. I haven’t been as many times as some, but I do count myself as one of the Festival’s most 'ardent' out of B.C. supporters.

2004 was my first trip to Ska Fest as a fan. The highlight for me was Stranger Cole letting me introduce “Run Joe” from my spot at the front of the stage, after a night of shouting out for the song:

Me: ridiculous smile plastered across my face.

I also remember many great performances that year including Dr. Ring Ding (who rarely gets to the U.S. these days), King Django, and The Soul Captives (whose Ray Jacildo has become a good friend.)

2005 – my second trip to Ska Fest, primarily to see my favorite band ever, Fishbone. The highlight had to be Fishbone, who continued to tear through several songs even the show curfew came and went, the house lights were turned on, and the house sound was turned off.

2011 was my first trip to Ska Fest as a performer (drumming for The Israelites.) One highlight for me was having Angelo Moore come on stage to jam out on Laurel Aitken’s “Sally Brown” with us. My first ska band, Franceska, recorded several still unreleased songs with Angelo and it was nice to finally be able to perform live with him. Another highlight was seeing Easy Big Fella play a reunion gig in front of a capacity crowd just as the sun slowly set over Victoria Harbor. Easy Big Fella and Franceska played many shows together back in the day. Now several members of Franceska have the honor of playing with Mikey “ShaSha” Birenbaum of Easy Big Fella in The Sentiments. In fact, it was this performance that helped spark the idea for The Sentiments.

AND MY MAIN POINT:

The sentiment (if you will) encapsulated in all my experiences at Ska Fest is a deep sense of community. As an “out of towner,” going to Ska Fest is like a family reunion for me - meeting those fellow fans, musicians, dj’s, and supporters you usually interact with only over the internet. There’s nothing quite like meeting a long-time internet friend or fan in person for the first time or after a long time apart.

I am Matt Griffin. I own Simmerdown Productions, a ska/reggae record label that has released music by the likes of Western Standard Time, The Slackers, Crazy Baldhead, U Roy, Prince Jazzbo, The Skanksters, Easy Big Fella, Franceska, and others.) I played drums in Franceska. I played drums in The Israelites. Now, my dream group has become reality – I play drums in The Sentiments.

Ska Fest to me has always been one of Victoria's most exciting festivals. I'm always looking forward to the bands that the Ska Fest team is bringing. The organizers provide a very special thing, allowing the people of Victoria to experience some of the greatest Reggae and Ska musicians/performers of our time. Playing and watching shows at Ship Point is one of the highlights of summertime to be sure!

The first Victoria Ska Fest was a mind blowing experience for us. It was our first time into Canada, so the scenic ferry ride on the way there, the hospitality from everyone, and the enthusiasm of the crowd all made it an unforgettable trip.

The second time we attempted to come into Canada we were actually denied at the border and even banned from crossing for a year! This was a terrible experience for us, but because we had such a great time the first time we played, we were determined to return.

When we finally made it back to VSF, it was an honor for us to share the stage with The Skatalites, & Easy Star All Stars. It was literally like a dream come true, and for me personally, it's still one of my favorite live performances for The Debonaires to date!

My favorite memory is breaking a string during last years show and having the boys from Bachaco notice, lend me their guitar, fix the string on my guitar and give me a beer onstage, all within 5 minutes of breaking the string. I think, it's a testament to how tight the bands are and how much of a community vibe there is backstage. Shortly after Blitz the Ambassador played the tightest set I've ever seen in my life.