The Wrecktals – Speaking their mind from time to time. 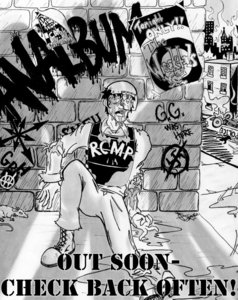 The Wrecktals – Speaking their mind from time to time.
An interview with bassist Christoph Leon
by Denis Maile of The Skinny

DM: How did you come up with the band name?

CL: As a reminder to never take ourselves too seriously, regardless of how aggressive our music got. It’s also a good defense mechanism. How are you gonna shit on a band that claims to be bumholes?

DM: So you’ve done the BC/ALTA tour a couple of times, give me your funniest tour story.

CL: When we played a gig in Calgary, the only two girls who showed up took us to a hotel. Fucking lovely ladies and friends of mine to this day. One of our drivers was being a sleaze and ignoring the fact that some people don't want to witness him fuck some random in the place we're sleeping, so the other lady and myself head to the bathroom. She ended up getting a little too rambunctious, bit the excess webbing under my tongue and tore it out. In the heat of the moment, I totally ignored the fact that my tongue was shredded and ended up performing oral sex on her, grating the wound on my lower teeth and removing the remaining tissue. Ouch. A part of my body that affected my speech my entire life is missing due to my first tour. Totally fucking worth it.

DM: You’re the creator of the Ridge Radicals group on Facebook, tell me a little bit of what that is all about.

CL: We’re a community for the radicals who support DIY ethic and Unity ethos. We don’t take shit. We’re dedicated to the dedicated. We’ll promote your shows for free, get the word out about your band and even offer you advice and guidance. This is not limited to just music either. Look us up, you won’t be disappointed.

DM: Your songs are very opinionated lyrically, what are some of the more important issues you cover in your songs?

CL: Instead of just simply being anti racist, anti sexist, anti ageist, anti homophobic . . . We would rather shed some light on preventative measures for the future, by focusing on what makes people the way they are. All human beings are products of their environment. You can take any normal baby and turn it into a homicidal maniac as an adult, or you can take a developmentally deficient baby and turn it into a normal, functioning, contributing member of society. We’re plenty full of Fuck-You’s, but they aren’t misdirected, ineffective or without an accompanying solution. We’d rather find a cure than simply punish the symptom. Unlike our legal system . . . And if that’s not a perfect segue to discuss some specific lyrical content on this matter, I don’t know what is. But I won’t. Discover our message by listening to our music.

DM: And on the lighter side, what are some of the less important things you guys sing about?

CL: Well, back to why we are named what we are: We have plenty of songs that are nonsensical. Simply having fun and enjoying yourself is just as crucial to revolutionary ideals as exercising critical thought. If the future you’re fighting for isn’t a positive one, then what the fuck are you wasting your time for? You gotta be the change you want to see in the world. You have to stand up against all the bullshit you face, but you also gotta have fun. You can be anti all the bad stuff, but you still gotta be in favour of something. Otherwise you’re being one dimensional, which is static and counterproductive to radical change for the better. We have a song about this called “One Dementia-nal”. Open your fucking minds, sing some songs about stuff you love instead of just stuff you hate. Must be so easy to be in a type-casted band like that. Must also be predictable and unfulfilling too.

DM: Your new album ANALBUM has been in the works for a while. When does it officially hit the streets?

CL: Fuck man. Don’t put me on the spot like that! It’s been recorded for a year, and mastered for a month. We’re poor fucking people who decided to attempt top-quality tracks and product. It equaled plenty of homelessness, hunger and a serious loss of momentum. It’ll hopefully come out for our June 11th homecoming show. In the meantime, listen to the shit free online.

DM: June 11th will be your first Vancouver show in over six months, give us the details!

CL: It’s our homecoming show from our third tour in just over a year. We’ll be rocking with The Ivy League Brawlers, Real Problems, Hypochrist from Grand Forks and Corporation from Toronto. Vancouver is at an all time low for underground, hardcore venues, and I’m not letting this one go down like the rest. But if you want to know details join the Ridge Radicals on Facebook and look for the event on June 11th. All the info is there. Posted: May 20, 2010
In this Article Artist(s) The Wrecktals, Christoph Leon