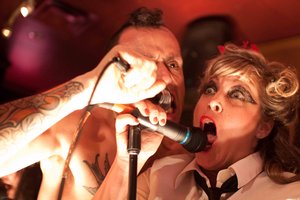 Blue Oyster Cult appeared at the PNE years back and gifted their audience with a towering fury of ten guitars driving their howling classic,”Godzilla”. The overpowering glory of their stringed abundance ground itself into the memory of Cal Thompson and drove him mercilessly toward his destiny – crafting and commanding an army of little guitars to herald his arrival into the hallowed halls of Valhalla. When the lights dimmed at the Princeton Pub for the headlining band on March 20th, 2010, I was joyfully assailed by the beautiful result of Cal's awesome obsession, Little Guitar Army. I want you to picture this. Low ceilings, cramped stage for a trio in a bar-bar set deep in the bowels of a hardened and forgotten district. Ten gifted performers, five guitars, two basses, two singers, one drummer, cram together with their gear, light show and pyrotechnics and sharpen their instruments of sonic destruction until Cal, aka Little Black Wings, takes command and leads the charge, his musical bloodlust placing him well inside enemy territory and paving the way for his soldiers to march fearlessly into the fray. Who are the blessed nine that follow Little Black Wings into such a delightfully wanton battle for your musical soul? Sonny Dean, ex-pat from the land of potatoes who’s rocked with the likes of Thor, shares point, using his big hair as a weapon as he cranks out beautifully string-snapping arpeggios on his ax. Uncle Miltie, also in the Sick Sick Sicks, Captain Dehab and The Strugglers, thrusts himself and the neck of his bass into the crowd like a torpedo and explodes upon the floor sending shock waves of his thundering rhythm line throughout the building. Linda Stang is a golden-haired pin-up styled Valkyrie with a vibrato so powerful it's almost serrated. The Bertman, squeezing the wonder that is his talent into other bands like Motorama and The Strugglers, brings his raging growl to the mike. He is the drill sergeant played by Iggy Pop on acid. The audience would have followed him off the edge of a cliff. Nicky Noodles is the captain, story-teller and masterful chord shredder. Doug Smith, of the Cadaver Dogs and Beladeans, is LGA's monolithic enforcer, protecting the stage and playing his bass so hard it goes off like an angry howitzer. Marcus Lander, also of Motorama, “walks quietly” on stage using his hands to play riffs sharp enough to split atoms and loud enough to crack glass. Tony Bardach, ex-member of The Pointed Sticks, one of Vancouver's first punk bands, wore the air of a five star general as his practiced and deliciously aggressive chord progressions made the cement that bonds LGA's wall of sound. Kegger Mac, also of the Fiends, Moist and the New Originals, hammered at the drums like he was calling Armageddon and did it so well, I was rooting for the Apocolypse.
What does all this mean? Well, LGA's performance at the Princeton Pub was nothing short of heart-stopping. I witnessed a tempest fury of talent and would go again in a second because an LGA gig is where “fun” goes for a good time. If you don't see this band and come away a believer, there is something seriously wrong with you and you should be weeded out of the gene pool. Posted: Apr 8, 2010
In this Article Artist(s) Little Guitar Army Resource(s) Princeton Pub