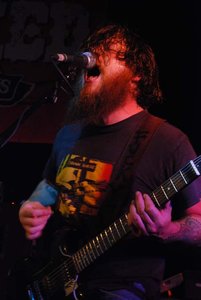 Bison members I spoke to agree that the closure of The Cobalt would (or is it will?) be a “huge blow” for the Vancouver music scene. “Bison has played The Cobalt probably about five times,” guitarist/ vocalist James Farwell tells me, “but my band before that, STREETS, probably played the Cobalt 8,000 times. Of the venues around here that younger bands get to cut their teeth on - The Cobalt is one of the main ones, y’know? Wendy will book any fucking band and put them onstage. And you know what - I don’t care how much a band sucks; that’s how you get better. You play live, and you experience the joy and thrill of playing in front of even five fuckin’ people, man. So I think it would be a travesty for local music in this city,” he sighs. “If I didn’t have a place like The Cobalt, I wouldn’t be here right now, for sure.”

Farwell - who, like Bison guitarist/ vocalist/ songwriter, Dan And, and bassist Masa Anzai, is a Cobalt habitué - opines that part of The Cobalt’s charm lies in its decrepitude. “Like, normal people go there and feel fucking uncomfortable. And we need that in this city, we totally do. I want the Yuppies to be afraid of going to The Cobalt. There’s too many places in this city where I feel uncomfortable going. Give me ONE place, you know what I mean?”

Masa - who, in previous incarnations, has been a free jazz sax player - acknowledges the threat to the Fake Jazz Wednesdays scene, as well. “It’s really disappointing that those guys, who made this platform to showcase avant garde music, and have been so successful, are going to lose that, too” he says -- though he’s personally seen more metal shows at the ‘balt than Fake Jazz events, reflecting his turn towards darker, heavier music.

Do developments like the impending closure of The Cobalt do anything to provoke the band politically? Farwell - who works in the Downtown Eastside as a community support worker - tells me he has “never been a hugely political person; however, the older I get, the more irrational I get, the more rageful I get. And I think, living in this city - if you’re not part of the upper crust, you can’t not become politicized. If you’re a bike rider in this city, even” - Farwell bikes to work every day - “I can’t believe you’re not becoming politicized by the bullshit that’s going on with cyclists and the tickets they’re getting. And if you work in the DTES for long enough, it’s impossible for you not to think that our government wants to kill poor people, doesn’t care about them. I think you’d be blind not to think that.”

Masa Anzai also works in the DTES, alongside Subhumans Jon Card and Brian Goble; he’s not blind, but he’s a little more hopeful and mindful to acknowledge positive developments. “The government’s trying to help,” he says. “They’ve got all these SRO’s that are coming up, and they’re pumping a lot of money in there, and all the shelters that they put up last winter really helped, I think.” Still, he tells me, he’s “a little nervous” to see what the Olympics will bring. “I really can’t imagine what’s going to happen,” he says. “I live in Strathcona, so I’m pretty much in the heart of it all. But it’s only for three weeks, and I’m just kind of sitting here waiting to see what happens.”

Dan and James are both considerably more wrathful when I ask them about 2010. “Aw, man... No Olympics on stolen Native land. The end,” James begins. “You have people dying in the streets. You have people living in garbage shooting drugs because they can’t get any help. Like - rent - do you rent? You gotta be joking me - this city is made for rich people. I mean, what’s going on, are they going to open up work camps? Are they going to open up more prisons or something? I just don’t understand what’s happening. It’s going to be a fiasco, and I think, quite frankly, it’s going to be hilarious.”

“Fuck the Olympics,” Dan agrees. “Just fuck the whole thing. I can’t wait for it to be over,” he says. “Closing things down, putting up condos, spending all this money fixing up Granville Street - like, who gives a fuck? What about everything else that’s going on in town? What about all the homeless people? What about the drug problems?” He shakes his head. “Who gives a fuck about Granville Street? It’s so wasteful - fixing up Whistler Village and making all this housing for the athletes - well, that’s great. They’re going to be here two months. What about the people that live here? It’s just so mind-boggling that it’s even happening. I don’t understand what’s wrong with people. ‘Oh, the Olympics, it’s gonna be great for the economy here!’ Give me a fucking break.”

Masa had voiced skepticism about James’ suggestion that the homeless would be shipped off to work camps (“A lot of people say that, but I’m not ready to fully believe that. I just can’t see the lawyers letting that happen”). What does Dan think will happen to dispossessed Vancouverites once the Olympics are underway? “I think they should give all the homeless people tasers and they can fuckin’ go to town on all the tourists,” he fumes happily. “Give them cattle prods, that’s what I would do - that would be an Olympic sport: outrun a junkie with a cattle prod, or, like, a crackhead with a crossbow. That’s the Olympics that I want to see! Some dickhead in a matching jumpsuit being chased by a bunch of methheads,” he chuckles.

Pretty dark imagery there, Dan! “We’re full of hate,” he glows. I grow ever fonder of Bison.

While we’re cultivating a murderous vibe, do Bison members realize that Vince Weiguang Li, the Manitoba bus beheader who ate bits of his victim, had a wendigo connection? (The wendigo, or windigo, is an Algonquin evil spirit that possesses a man and instils in him an insatiable hunger for human flesh; it is also the subject of Dan And’s two-part “Wendigo” song on Quiet Earth, reflecting the massively-bearded guitarist’s half-Algonquin heritage). Ten days prior to his murderous episode, Lee had apparently delivered copies of The Edmonton Sun with a feature article on the wendigo - a weird coincidence that has spawned considerable buzz online (cf Loren Coleman’s Twilight Language blog). “Oh my God - that’s insane,” Dan tells me. “That blows my mind.”

Dan’s song “Wendigo Pt. 1 (Quest For Fire)” is a first person story of a settler whose friends freeze and/or starve to death, so he eats them and is taken over by the wendigo, making his hunger grow even more. “One thing I’ve always been really obsessed with,” Dan tells me, “is stark, bleak, frozen wastelands. “Like, all my favourite movies are stuff like The Thing - movies where there’s absolutely no hope whatsoever.” He’s also fascinated with the Shackleton story - of explorers surviving in Antarctica for a year - and “the idea of possession” as a metaphor for inner conflict, all of which inform the song.

Is it scary to go to the dark places required to sing “Wendigo?”

“I don’t find it scary, I find it more relieving,” Dan tells me. “I’m sure that everybody at some point in their lives has found themselves in a really dark place, and they don’t know how to express how that feels to people, so honestly, it helps me with that, to be able to be able to sing about that, and to be like, ‘Sometimes I feel like this is happening inside of me, and I don’t know how to deal with it.’”

“Wendigo” parts one and two are not the only dark songs on the album, however. “I think if anything the last album the theme was just straight up death,” James says. “All sorts of different types of death - spiritual death, actual physical death, death of the soul, death of the earth, death of culture.” Though Dan And feels like there is yet more darkness to be “delved into” and purged, Farwell remarks that he’d like to move away from the darkness a little for their next project. “I want to write things that are inspiring and have good vibes,” he tells me, apparently without irony. “I don’t want to always be a downer, you know? ...because I’m also so full of love that I want to fuckin’ rip my head off.”

Bison plays The Commodore with The Golers and Three Inches Of Blood on September 11th. Posted: Oct 5, 2009
In this Article Artist(s) Bison