GWAR – Oderus Urungus Does Not Smoke Crack Well With Others 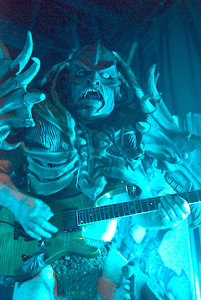 GWAR – Oderus Urungus Does Not Smoke Crack Well With Others

Oderus Urungus is not the sort of intergalactic barbarian warlord who minces his words. I spoke with the leader of GWAR recently, and between copious puffs on his crack pipe, he waxed maniacal on GWAR’s upcoming album, Lust In Space. Suffice to say - you never know quite what to expect from a GWAR interview. In prep, I half-expected to interview Dave Brockie, Oderus’ human alter-ego, so it knocked me for a bit of a loop when I realized I’d be interviewing Oderus and not Dave. Shit, there go half the questions. Fuck it. Run with it. Or try to, anyway.

Mistake Number One: Not knowing in advance who you’ll be interviewing. Right off the bat, I bring up Oderus’ recent appearance on Fox News’ Red Eye program (which is about to become an ongoing gig for OU), I manage to stammer that he was the one person who could keep me interested in watching Fox News for more than a few seconds without changing the channel. “Well, I’m NOT A PERSON, so that shouldn’t happen!” Uh, okay, Oderus, my apologies, what I meant to say was ‘the one intergalactic warlord barbarian’ who could keep me from changing the channel on Fox News. My bad. Strike One.

Mistake Number Two: Complimenting the warbeast on the four preview tracks I’d heard from the yet-to-be-released album (which, in my opinion, are –honestly- some of the best songs I’ve heard from GWAR in years): “Well, maybe then we’ll just keep it at four [songs], if it’s incredible, and it’s four, we can save the other EIGHT for two more albums!” Uh, okay, Lord Oderus, sorry for trying to convey that what I’d heard of the new album seemed to be a fine return to form for the Scumdogs. . Strike Two.

But then another big hit on the ol’ crack pipe (“Ahhhh, vaporizer, I love it… Deliiiightful.”) seemed to mellow His Urungusness –slightly-, and I resumed trying to ask questions which wouldn’t offend. Or confuse. Too much.

So, GWAR was making scheduled to appear at this year’s annual Comicon in San Diego the following weekend - was this to finally unveil the line of GWAR action figures that a certain company has claimed they’ll be putting out, eventually? “Ahhh, that’s SUCH a LIE!” exclaims Oderus, “That company’s so RIDICULOUS! They started working on Metalocalypse, and forgot all about the GWAR project! I think they made a Beefcake [the Mighty, bassist] prototype that was way too skinny. And the owner of the company came by here in a drunken mess, fell down on Gor-Gor, and broke his neck. So, naw, that’s not gonna happen. I don’t know when the fuckin’ toy industry is gonna get its fuckin’ thumb out of its ass and fuckin’ make a GWAR toy, but somebody needs to.”

Alright, so when is GWAR going to go the KI$$ route and start merchandising everything out the ass? How soon can we expect GWAR tampons? Oderus lawn fertilizer? Balsac-branded Jaws of Life? “Never, we’ll never be as lame as KI$$.” That said, though, GWAR did invoke Love Gun on its new album’s cover, no? “Ah well… we did COMPLETELY steal that from them, so I guess I have to give them a little something… It’s just… the thing about GWAR is, we’ll keep it together… the reunion tours, the endless KI$$ reunion tours. They keep telling us ‘It’s the last time’, but we KNOW it’s not the last time, quit LYING to us!” So, then, why doesn’t GWAR just kill KI$$? “Weeeeelllll, I guess I’m happier in a world WITH KI$$ than without it.”

At this point, I think the effects of the crack cocaine were starting to wear thin, as was Oderus’ patience with my interview. He lapsed into slurred gibberish about having lots of “faith and support for those swaggering elderly rockstars of the sixties and seventies, still princing {sic} and mincing about the stage… you know, Mick Jagger, and Mick Jag-ger, and oh…Frankenfurter, and all the other great lead singers… Oh, and the fat Osbourne child - who’s a whore, and she should be attacked with a pig… a LIVE pig… on her… a pig on a pig!’ Then, collecting his thoughts, “I guess she’s a little passé, we’re not gonna bash Kelly Osbourne… after all, she’s been smart enough to get her FAT ASS off of television. I’m sure she’s an executive, or perhaps, I don’t know… she’s cleaning up piles of her mother’s SHIT!”

Attempting –and failing- to get back on some sort of track, I ask, why did the world need another GWAR album RIGHT NOW? “Oh, well, the world ALWAYS needs another GWAR album! If we could, we’d release a GWAR album every day. That’s what we’re gearing up for next year, an album every day… world… tour. A CD, a DVD, and a VCD… as well as a lot of other formats… I don’t know exactly WHAT it is, but it’s going to be expensive, and you’re going to want to buy at least FIVE!”

Settle a bet for me, Oderus. Set the record straight on a hotly-contested, back-in-the-day rumour: Was GWAR –not that petty human laws apply to intergalactic barbarians- ever banned from Vancouver, Canada? “Never! They tried to cancel shows, they tried to bamboozle us, and even hid the country at one point. A massive smokescreen was deployed, and a bum-rush of Canadian Mounties at a crucial moment of the battle caused us to lose out way as we chased it [the country?] down. And as anyone who sees a Canadian Mountie is driven with a fury to kill – I know there have been a lot of Canadian Mounties killed in the line of duty, and I ask you, We see them moving around in their big red coats and it’s natural for us to want to kill them. So, basically, if they took off the red coat that says “Kill Me!”, and the hat that says “Now!”, maybe they wouldn’t be getting killed now, would they? I’m trying to save lives here!” Perhaps they’re too busy tasering legal immigrants to death? “Oh, that was a good one; I will applaud them for that - the torture-murder of that immigrant in the airport in front of everyone. It set a precedent that has made Canadian border police feared and hated!”

It is rumoured that Oderus’ human alter-ego is himself a Canadian – does this have something to with the band’s seeming affinity for the city of Vancouver? “No, I think it has more to do with the availability of crack and cheap prostitutes. It’s very easy just to stumble out the back door of the Commodore and have an Eskimo bitch upon your tip in five seconds. It’s almost like the salmon leaping upstream. Eskimo crack-hos spawning themselves madly. That’s why they love Oderus, they come see me and it’s All The Cum You Can Eat!” But, surely, Oderus, surely you share the crack cocaine? “No! I do not smoke crack well with others! I can smoke it with others as long as they understand they’ll get NONE! I will hog the bowl and burn you with the stem! I will make crack-stem tattoos on my bitch!”

As for the upcoming tour, there was mention made of tourmates Lamb of God whom GWAR will be opening for, for part of the trek, anyway. “I do believe the West Coast is on our own, we’re breaking off… Lamb of God go off and do some dates with Metallica. And WE’LL come by [those shows] and try and suck off Metallica. We don’t get to be on the tour, but we DO get to come and suck them off. I don’t really want to do that, but they say that’s something important that bands do for each other, so we’re trying to be better about… not killing other bands. But then of course, a lot of people DO want us to KILL Metallica. So maybe it might NOT be a good idea to meet them… We tried to get it put into the tour rider that we would get to masturbate Lamb of God onstage, but we were told that sadly, it was not to be.”

The conversation further devolved into more crack-induced raving about black Army helicopters which periodically fly out to wherever Oderus is, and drop off large crack boulders which keep him going for a few more days as he and GWAR wage mayhem across the countryside, eating children in their wake. Somehow he got on the topic of the Tonight Show and how GWAR “could be on the show anytime we wanted”, but they had to walk to the studio (?). He then proceeded to rave more about becoming an ‘interplanetary correspondent’ for Red Eye, and stealing Nardwuar’s tartan hat to wear upon his nutsack.

At that point, I had no further questions. Where could I take it from there? “Excellent, I was just beginning to tire of speaking to you. Farewell!” Click! And that was it. Thankfully, Oderus didn’t reach through the phone and kill me, which I half-expected. You can hear GWAR’s new album Lust in Space, when Metal Blade releases it on August 18th. Posted: Aug 5, 2009
In this Article Artist(s) GWAR, Oderus Urungus