Nervous Fellas with Deadcats and Swank 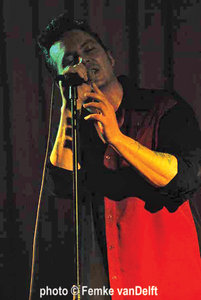 I remember witnessing a leather-jacketed rocker viciously take to pummelling a much smaller, dreadlocked kid at a Reverend Horton Heat show a few years back. Maybe he disapproved of the kid’s hairstyle or his assumed infrequency of showerin’, or maybe the kid had stepped on his toe, but it seemed a brutish and unmotivated attack, and ample evidence that there is a streak of violent shitkickerism in the rockabilly scene that sits ill at ease with me. Thus, when Swank - the middle band of three at the Nervous Fellas reunion concert, who presented like well-groomed workin’ men out to get laid at a cowboy bar, started their set by singing a song with the refrain, “wipe that smile off your face, you fuckin’ hippie,” promising consequences if the addressee got “lippy,” I bristled a bit. Their songcraft and musicianship were strong and performance amply entertaining, but the shitkicker subtext made it hard to get with ’em.

Ironic, then, that it ends up, a couple weeks after the fact, that the “fuckin’ hippie” tune is the only song I actually remember from the night. The Deadcats didn’t offer the best performance I’ve seen of this long-lived, but not-much-appreciated band - though their set was greatly augmented by the addition of burlesque dancers. Main act The Nervous Fellas, back on stage after a nearly twenty year hiatus, seemed somewhat constrained by their genre-fetishism for classic rockabilly, their songs and costumes working so hard to evoke the 1950’s that I felt at times I was on the set of a movie. They were polished and enthusiastic, like they hadn’t been away at all (or even aged), and their hairstyles and clothes were perfect, natch, but their songs didn’t really grab me. So the shitkickers prior end up getting the most respect from me, as a band. Funny how that works.

The real winner of the evening, however, was The Rickshaw Theatre (254 E. Hastings). A sloping floor meant an ample number of people could stand at the raised, sizeable stage while those who wanted to could sit comfortably and still see; concrete walls seemed to suggest that the place would be free of the Ubiquitous Vancouver Noise Complaint; and the ceiling was high and the sound decent. The overall design - while it needed some polish and a sign - had an appealing, old-style moviehouse feel (it was formerly The Shaw, run by one of the Shaw Brothers of kung-fu movie fame). Nice to have a new venue to be excited about in town! Posted: Jul 9, 2009
In this Article Artist(s) Swank, The Deadcats, The Nervous Fellas Resource(s) Rickshaw Theatre