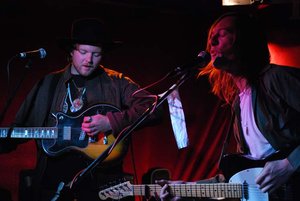 The signature choo choo train circled the ceiling of the Railway Club as Sun Wizard took the stage on May 15th. The first of four Vancouver bands, Sun Wizard warmed up the crowd in their third performance to date.
With unwavering pop sensibility, vocalists James Bull and Malcolm Jack tag teamed leading, James styling in the spirit of Tom Petty, while Malcolm channeled Bob Dylan. The intersection between these styles with tight vocal harmonies stringing the songs together -- that is Sun Wizard. That said, attempting to pin their sound is folly, as they’ll no doubt grow with continued collaboration and recording set to begin in two months at The Hive. Stay tuned.

The crowd doubled for Adelaide who had the second, arguably most coveted, spot on the bill. Adelaide are like cake: forget about trying to isolate one magic ingredient. Dirty guitars, harmonica, feedback, blues, haunting vocals and driving percussion: the magic recipe.
Opening with “North Dakota”, Jesse Booi delivered soulful, crackling vocals and although his lyrics were inaudible, his message was clearly felt. From the up-beat “dancer” to the atmospheric “Aint No Sun, ” Adelaide commanded the crowd with authority, receiving the strongest response of the evening, from toe tapping to head banging. In the down tempo bluesy rock of “Eagles” Adelaide demonstrated excellent use of stalls, building intensity.
Booi is one of few front men I’ve seen who shies away from the spotlight, positioning himself stage left every time. But the character and strength of his voice compensates for his understated stage presence, and we can’t all be Freddie Mercury, right?
Count on drummer Joel Loewen to strip off his shirt as the set progresses --. partially unbuttoned by the third, fully open by the fifth and off by the seventh. But if you’ve seen them, you know how fucking hard he’s wailing back there!

MINTO followed Adelaide in their first official show after returning from recording with Steve Albini in Chicago. Of all the evening’s offerings, MINTO were the most mature bands, they even had t-shirts!
Merch aside, their focus could be seen and heard on stage with tight vocal harmonies, righteous rock and strong stage presence -- front man Wally verging on theatricality. A big voice and bigger personality, he was the only capital “F” front man we saw that evening and towards the end of their set, he picked up the tambourine with such a zesty, stylized approach he half danced with it.
Minto’s pop-rock frenzy is fresh, keep an eye out for their upcoming new album.

Closing a great night of railway rock, The Sumblers Inn (comprised of three brothers and a childhood friend) delivered a high-voltage performance for the lucky remaining crowd. Graham, the barefoot bass player, slapped his strings, while Alec sat (due to an injury) centre stage, asking us to “please drop your brain off at the door”. Jeff contributed ambient organs in their 1st song, the haunting vibrato taking the rest of the evening for a psychedelic turn. Posted: May 24, 2009
In this Article Artist(s) The Stumblers Inn, Adelaide, Sun Wizard , MINTO Resource(s) Railway Club