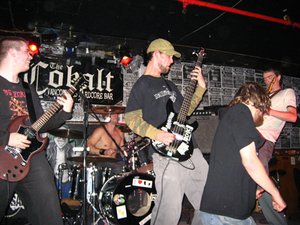 Wantmonster are straight off the hard streets of Nelson B.C. Ok, the streets there aren’t very hard, unless you’re afraid of hippies with giant dreads that look like matted down stinky beaver tails, and who isn’t? Wantmonster is the total opposite of what you would expect a band from Nelson to be like. They can play either punk or metal shows as they fuse these two genres together seamlessly. They are also the type of band that will play anywhere, from deep in the forest to the corner of a dank basement. Wantmonster is made up of Rob on drums, Sam on bass, Joe and Harlan on guitars, and Jordan takes care of the manic screams department. He’s got this crazy stage presence that sometimes has him rolling around on the floor and other times busting hilarious quips in between songs. You think he’s going to be a mad man in real life as well. Instead he’s a pretty mellow down to earth guy, but thankfully still hilarious. I met Jordan long ago on a balcony owned by Mr. Awesome that should have been condemned. Luckily Wantmonster played in the kitchen that night and I have been a big supporter ever since. Our bands even toured together once, which fueled a few questions in this here interview.

Jordan: Vancouver’s always been a great place to play. The scene seems to be mainly based around ultra seedy bars and crusty basement shows. Those are the two environments we thrive in, I guess. One time that sticks out was playing with Circle the Wagons, Married to Music, and the almighty Jones Bones at the Lamplighter in 2006. That’s like my dream lineup, and as I recall, a lot of punk heroes from my youth were in the audience.

Jordan: Having to convince the bartender at the Columbia that we’d been booked there months prior was kinda low.

Denis: Remember on tour when we played in Rocky Mountain House at that party and Joe was so drunk that he kept calling Rob ‘The Fonz' and wanted to fight him?

Jordan: Honestly, not really. I’d say that collectively that was the drunkest we’ve ever been. I have vague memories of waking up really drunk and inquiring about the poon sitch.

Denis: Remember that tiny guy at the party? He was like half a midget!

Jordan: That foul-mouthed little person was a rather politically incorrect character. I speculate that he must have been the mayor of Rocky Mountain House.

Denis: What’s the craziest thing that has ever happened AFTER a Wantmonster show?

Jordan: After a rowdy night in Whistler a member of Married to Music broke into our hotel room naked while we were trying to sleep, and he tried to whip everyone with his junk. I had to ask myself some tough questions that night.

Denis: Have you heard the new Mr. Awesome album?

Jordan: I’ve heard a couple tracks. That man is a national treasure. It’s really too bad the Skinnin’ Shack can’t do shows anymore.

Denis: Do you have a pick for album of the year?

Jordan: Not as such, but I’ve been rocking the new Fuck the Facts a lot as of late. There’s been some killer new stuff from Novillero, Protestant, Man Man, Invasives, and Insect Warfare.

Denis: I’m going with Man Man. I only heard about them this year, thanks to you!

Jordan: I’m getting sick of people saying there aren’t any good bands anymore. Hardly a week can go by without me discovering some group that blows my weak little mind. If you think music today sucks then you’re not looking hard enough.

Denis: Future plans for the band?

Jordan: Well, Rob’s sperm has successfully resulted in fertilization, so I doubt we’ll be touring much as he adjusts to his newfound fatherhood. We’re planning on recording our first full length this winter. By full length, I mean 9 or 10 songs, so it’ll probably be about 12 minutes long.

Denis: If you had to share a bed with one of your band mates, which one would it be?

Jordan: I’ve already shared plenty of urine stained floors with all of them. A real bed would be far too luxurious.

Be sure to catch Wantmonster @ The Balmoral Nov. 22nd. Posted: Nov 24, 2008
In this Article Artist(s) WantMonster