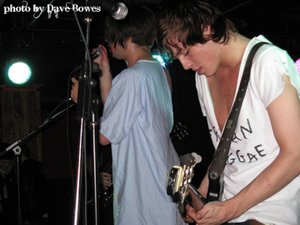 I missed opener The Green Hour to attend the fundraiser at Pub 340 for the guys in The Hotel Lobbyists. A tragedy of that scope has not hit the Vancouver scene in many years and the survivors need our support. I did catch most of headliner Fake Shark Real Zombie though, and in spite of hearing the buzz for years, it was the first time I’d seen then live.

Fake Shark is in the (sadly) not unusual situation of being more popular elsewhere than they are here in their hometown and so, reasonably enough, play out of town lots and here almost never. Last time was in the spring I guess but here they were again to throw a few spastic tunes at the feet of their moshing minions. It’s a retro punk and post-punk grab bag, with patches of wan Cure-like stuff, some chirping, hysterical, choked MSI style staccatos pieces, some Exploited flavour snarling, angular guitar driven Gang of Four influenced tunes, some weird Mr Bungle-y riffs and, hell, you name it. They even did an irreverent take on Purple Haze with some of their own ‘fuck you’ lyrics tacked on. Which cuts to the heart of what the band seems to be all about: lots and lots of snide, punk attitude.

In fact the whole show screams of self-concious punkness, right down to the uniform of army boots and ripped t-shirts with self-Sharpied slogans, one strangely touting something about reggae. Singer Kevin Krosner went a step further, wearing a hospital gown enhanced with the memorable motto ‘puke rock’. He avoided going a step further in other ways though: there was no trampling of photographers or fistfights with the audience this time around, as there has been notoriously in the past. But not for lack of trying. A guy up front was chided for humping Kevin’s monitor and other insults were hurled casually around the room, but you got the feeling this was more so the audience wouldn’t forget who they were watching than in the name of real provocation.