Get Lucky with Tom Holliston! 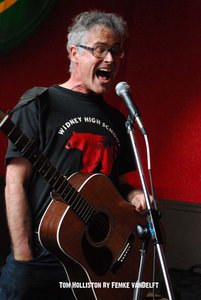 I’ve always thought that someone should rhyme “Erik Estrada” with “vagina dentata” in a song, and it occurred to me, when I came late and awestruck to the solo output of songwriter and Nomeansno/Hanson Brothers guitarist Tom Holliston a couple of years ago, that he would be the ideal man to do it. His three delightful, under-heard solo albums and his Show Business Giants’ oeuvre reveal a marked fixation on celebrity, and there is an obvious love of wordplay in Tom’s lyrics. If anyone could work “Erik Estrada” and “vagina dentata” into a couplet, Holliston would be the man.

When I slip the suggestion into our interview, I am pleased Tom gives the idea some thought, and then dazzled that he takes it one step further, showing a genuine surge of interest in Estrada. “It wouldn’t just be the rhyme! After doing CHiPs, now he’s selling property in Arkansas - like, time-shares!”

“Oh, I guess I just luck out when there’s something on TV.” Tom - who has told me elsewhere that he finds TV these days embarrassing and impoverished, compared to the shabby charm of Match Game and late night B-movies of yore - confides that he does sometimes watch TV in hotels when on tour, and that his favourite part “is watching local weather forecasts, or the local car dealer - y’know, the sort of quirky guy? It’s one of my favourite things.” (It is not always obvious when Tom is being ironic). “I don’t know if you remember, but there used to be ads on TV with Forrest Tucker and George Kennedy? Forrest Tucker” - best remembered, perhaps, for his roles in the television comedies F-Troop and Dusty’s Trail - “had this great business: he set up a studio in the basement of his house in Baltimore, and he would do ads for anything. He’d produce it, do all the technical work himself, script it - he had a company, and it was like, ‘you hire me, and I’ll stand in front of a wall and talk about your product for thirty seconds. Give me thirty thousand bucks and I’ll do everything!’ I find that really interesting, what people do after their television career, or whatever - finding out what people are doing now. So Erik Estrada being a pitchman for timeshares in Arkansas... It’s fascinating.”

Television appears every now and then in Holliston’s songwriting, for instance “The Story of P.” on the Show Business Giants’ Maybe It’s Just Me... “I know it doesn’t really make sense, but that’s about a bad television show that’s run out of ideas - a show like M*A*S*H*. The Korean war was on for three years, M*A*S*H* was on for ten – that’s just silly, in my opinion. There’s only so many things you can do with three guys living in a tent, and so it’s sort of about that idea, where things will get more and more far-fetched, and people’ll get increasingly out of character to the point where they’re doing superhuman things,” like using their cufflinks to escape from a rockslide, as happens in the song. “It’s like, ‘We’ve done everything we can with this person, let’s have him grow a beard now.’ If there were a character who was exactly like W.C. Fields, after a couple of years, he’d be picking up babies and petting dogs, y’know? It would be - ‘change it around to become more palatable; who cares, nobody’s paying attention anyway!’”

While I have him on the phone, I must ask about the eccentric musician’s Widney High School Kodiaks shirt. He wears it so often onstage that there must be a story behind it; and indeed, there is. “Widney High School is a high school in Los Angeles, and it’s got a special needs program for kids. Some of the teachers there have a rock band, and the kids are invited to sing and write their own lyrics about their lives. They’ve put out three CDs, and we played with them once. We did a New Years’ Eve show in San Francisco - Nomeansno, Mr. Bungle, Fantomas, the Melvins, and The Kids of Widney High. It was quite the bill!” It sounds somewhat akin to the Langley Schools Music Project - a celebrated piece of so-called outsider music, except there is an element of smug irony in the consumption of such product that seems absent here. Tom confirms this. “I think it’s quite edifying to see these people who are perceived to be disadvantaged, possibly, physically or mentally - although I’m not really sure what that means, but they have certain problems or learning disabilities - and they’re writing about it. A lot of people are quite cogent about, ‘Oh, I’m not really good at doing this,’ and I think people who are mentally disabled might be aware that they have something that’s difficult for them to do at times, too. And so they’re presenting themselves as people - ‘I’m just part of the crowd, too; this is who I am.’ I think it’s a really worthwhile project, and high schools don’t always have this sort of thing.” The Kodiaks are a sports team from Widney; a friend from LA gave Tom the shirt some years ago.

Since we’re talking about clothing, what of the joker suit that Holliston wore on the cover of Nomeansno’s Dance of the Headless Bourgeoisie? “It was made for me by a woman named Marlise McKee,” Holliston explains. “I guess Rob Wright just started labelling me as a mischief maker. I’ve always loved prank phone calls and such, and I love disinformation. I think it’s fascinating, you know? I realized from firsthand experience that if you tell people the truth, it will get so distorted that you might as well not... There’s always been disinformation associated with Nomeansno. In the 1980’s, before I joined the band, I used to do press releases for them” - under the name W. Buzz Ryan, which has occasionally also served as the nom de press release of John Wright. “We’d send out information about the band and biographies and they’d be destroyed and screwed up and completely wrong in print, so - ‘Okay, let’s make up anything,’ because that’s what people are going to do anyway!” The Nomeanswhatever website is so rife with Tomfoolery that editors of a certain national Canadian magazine that ran a Nomeansno review of mine used a photo whose caption identified Holliston as Rob Wright and John Chedsey as Tom Holliston. (John Wright remained himself; Rob was completely absent). It was a tad embarrassing.

Another question that Tom Holliston fans will want to know the answer to: why is Holliston not particularly enthusiastic about re-releasing his early output, like the 1990 collectible cassette-only release, Gold Love by the Show Business Giants (then consisting of Tom and Steve Bailey, also of the fabled Victoria punk band the Neos.) Tom chuckles at the question. “With the first couple of cassettes we made, it’s like - does everybody trot out the short stories they wrote in high school? You might keep them, and there might be one or two you kind of like, but... I don’t want to spend X amount of money to put it out on CD. I just don’t think it’s worthwhile.” It’s true that there are relatively few Show Business Giants completists out there, but the cassette does feature the original version of “My Girlfriend’s a Robot,” a Ramones’d-up version of which appears on the Hanson Brothers’ debut release, Gross Misconduct; it increases its historical interest.

Tom has, in fact, written several songs for the Hanson Brothers: “I wrote ‘Four Heads, One Brain,’ and ‘My Problem.’ John writes most of the stuff, though. I really enjoy collaborating with him, you know? I have a lot of fun sitting down and working out riffs with him; I like John very much. But ‘My Girlfriend’s a Robot,’ that was years ago that I wrote that. I used to chum around with (previous Nomeansno guitarist) Andy Kerr quite a bit. We were roommates for awhile in Victoria, and we were talking, and he said, ‘Yeah, once in awhile we do Hanson Brothers shows - you should write a Hanson Brothers song.’ And so I did, in 1987 or something like that.”

The Hanson Brothers have a new live CD/DVD - also available on vinyl - called It’s a Living, featuring a previously unreleased song. “It’s called ‘Cabbage in a Bag,’” Tom reports. “The Hanson Brothers used to ask promoters to give them a cabbage in a bag with sparklers, then onstage we would stick the sparklers into the cabbage, and throw it to someone” - usually the referee, Nomeanswhatever webmaster John Chedsey - “and then we’d yell ‘Cabbage in a Bag,’ and look real proud, like we’d accomplished something.” Tom assures me this practice has “absolutely no meaning,” though it does partially explain John Wright’s repeated mentions of cabbage during the last Hanson Brothers show in Vancouver (the one where Robbie Hanson exposed the geoduck hidden in his jockstrap, which dangled down between his legs for half the set, until he chucked the stinky thing into the audience). The Hanson Brothers will be doing their hockey-loving shtick live through the fall and winter, though as of this writing, no Vancouver dates have been announced.

Holliston’s solo acoustic set at The Main on September 20th will be different from his Black Frog show earlier this month, he tells me. Once again, darkly humorous Saskatchewan singer/songwriter Dave Lang will be opening. “It’d be nice if people came out and enjoyed themselves,” Tom acknowledges. “And if they don’t enjoy themselves, there’s always a chance that they might get lucky...in whatever sense they understand that term.” There will be several new songs in the set, as Tom amasses material for an album, which he hopes to record early next year; and of course, there will be much of Tom’s vagarious persiflage between songs, and perhaps a handful of recipes thrown out into the audience (which Tom is usually happy to sign for fans; Femke and I, by coincidence, both ended up with Herb Broiled Chicken).

As for Erik Estrada, Tom has not yet written a song, to my knowledge, which features my offered rhyme, but he has promised me that, at the Main, he will perform one of my all-time Tom favourites, “Genitalia Issue,” a shot at supermarket tabloids that references, on one hand, cock rings, condoms, Chlamydia, lubricants, and the size of “labia and weenies”; and, on the other, both Charles and Marilyn Manson, Johnny Depp, Uma Thurman, SXSW, and Benneton. It places celebrities and genitalia in close enough proximity to satisfy me for now. Posted: Sep 22, 2008
In this Article Artist(s) NoMeansNo, Tom Holliston, Showbusiness Giants