What Swank Did on Their Summer Vacation. 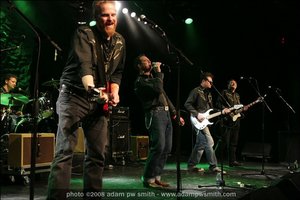 Swank sashayed out of Van this summer. How many gigs in how many nights?

6 gigs in 6 sweaty nights! It was like a military operation, but with booze.

Name clubs and the bands that you played with.

How did the crowds react to the more churchy songs where Spencer rolls his eyes back in his head yelling “Jebus is comin’ to our town!”? Did you convert people or were they already converted? Did they all yell, “Yes, he is!”

We did convert a few souls from scotch to irish whiskey.

What did you drive to get there and how many instruments did you pack? Who did most of the driving? Who fell asleep first in the car? Did you see any wildlife?

Rented minivans...ours had a dvd player! Phil & Dave did most of the driving. Not sure who fell asleep first, but Spence was the first person to fart... We shared drums & amps with Eldorado...most of the wildlife we saw was at the Canmore Hotel, plus a few crackhead sightings in the Rockies.

Finish this sentence: “In order to save money on this tour we…

Ate roadkill, switched from 18 year-old to 12-year old whiskey & relied on the kindness of strangers.

Did you sell lots of merch? Did you lose money on this tour?

Sometimes you make more in merch than at the door! The most merch sold was at the smallest gig, in Kelowna.

Did you get drunk every night and party your brains out?

We did party but the brains are long gone anyway!

Any lessons learned or wisdom to impart?

Don't pose with naked girls on hotrods parked behind the club if you don't want your wife to see the pictures on facebook!
In Alberta, "Hey Faggot" is some form of greeting.
It's a fucking long way from Kelowna to Lethbridge.
The traffic in Calgary is even worse than Vancouver.
Don't ever watch the Jim Carrey movie, "23"! It sucks!

When is the next Swank show?
Swank's next gig is Sept 27th at the Grease n' Grind in Pat's Pub. Posted: Sep 8, 2008
In this Article Artist(s) Swank