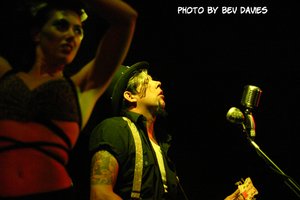 1. Hi John. First off, can you introduce yourself, your band and dancers?

You can call me John - I play a big Gretsch guitar and do the main vocals - I also do most of the songwriting. The band really began when sCare-oline (upright bass) and I started playing live together in 2001. The lovely and talented JT Brander is the most recent man behind the kit. Every once in a while Stuart Quayle also steps up to the drum throne - and sometimes they do a dual solo which is pretty awesome.

The Voodoo Dollz have been run by the world-renowned burlesque dancer and pin-up model Little Miss Risk for years and her partners in crime are currently Lola Frost, Camero Luvroc and Lil Luvroc. It's sexy as hell and so much fun to be on stage with them but behind the scenes we're a big, ridiculous family. There's a lot of reasons the band is called "Big" John Bates, I find new ones all of the time.

2. When did you start playing the guitar? I can imagine you picked it up at eleven years of age and they called you Little John Bates back then...

Nah, they never called me Little John - I was always the tallest kid in class. Of course that was before the growth hormones showed up in milk or whatever and everyone mutated. Anyway, I started playing when I was like 15 and was pretty much a natural. I had a couple of months of lessons to learn a few chords and a few AC/DC songs but my style has mostly developed by ear.

3. I think your band is one of - if not the - hardest touring indie bands from Vancouver. It is insane the amount of touring and back to back that you guys pull off. Can you give our readers a bit of a tour overview - enough to make them jealous, John?

We all love touring and spending time together - up to about 6 weeks. Then all bets are off. Sometimes I think it's because we have a real good dynamic with three girls and two guys in the group. I have been in bands touring with just guys and guys can get pretty mutually destructive. We started in the States and Europe more than Canada so it was always about new territory and making friends to go back to visit. We know some amazing people all around the world these days. We usually play around 100 shows a year including one 6-week European tour including festivals, two 5-week Can-Am tours and a 2-week West Coast tour. Then we play shows and festivals around BC, Washington and Alberta and occasionally fly out to do festivals and one-offs. We haven't really toured the Eastern seaboard and the south east of Texas so that is something we're always looking for. I hope to be doing about 200 shows a year soon.

4. Any touring stories that would make us cry and sell our souls to the devil for guitar licks like you did?

Meeting BB.King after a show in Vegas? Bringing a burlesque show into a federal prison in Belgium? Being flown into Sicily to headline a festival in Palermo? Being asked to play the Democratic National Convention for Obama was pretty cool too. (They had to get an American burlesque troupe instead to appease the taxpayers but our show turned them onto burlesque.) We played the Ink & Iron Festival this year on the Queen Mary in Long Beach, in the hanger built for Howard Hughes' Spruce Goose. Sometimes it seems that we barely know what's going to happen onstage - and after the shows the real madness begins. So what if I eventually get hung at the crossroads, it's been a blast. In fact, one dancer's mother threatened to do that to me once. Some days I wish I'd saved that voice mail.

5. Do you lose money on your tours? If the answer is no - can you give any bands out there advice....

Not usually - mainly 'cause after getting ripped off by the industry in my first band I went to business school. But BJB had to start somewhere so I recorded the first BJB album with friends and got it on a Spanish label. I had been teaching myself html to build and take care of the website, promoed everything I could online, then got a small line of credit and took the group out on the road to see if the whole idea would fly. It was received so well that I eventually managed to start a record company, get a loan and sunk the money into making sure we had vehicles, food, gear and costumes and could survive while we played our asses off for $100 a night. And make more records. So yeah, we lost lots of dough for the first three years but even those bad old days saw more than their fair share of fun. I also bought a video camera before the first tour and learned to edit footage to make videos fom live footage - some of the backstage stuff is pretty hilarious. But I definitely could not do it alone any longer at this point so I'll tell you where to give the real credit.

The girls are all involved in different aspects of the group behind the scenes as well, when their time permits. Camero Luvroc has helped me out in too many ways to count when she can get away from her shop (East Vanity Hair Salon). Little Miss Risk has also become a pretty stellar publicist and works for our record company (Devil Sauce Recordings) while sCare-oline and Lola Frost take care of our merch. Lil Luvroc helps us with flights and things for touring in Europe and every blue moon Miss Cherry Ontop steps in and helps us out onstage as well. It's like "Cottage Industry Gone Wild"! I really couldn't ask to be surrounded by a more awesome and incredible group of people. There, now you all know my secrets.

6.The amount of people that you take on tour, is impressive. You could be Big Daddy John Bates with all the managing that you have to do. I heard a rumour that you have to lock up your dancers at night otherwise you'd lose them. Is that true?

Sometimes they should be locked up but Miss Risk is pretty good with a hairpin. There was a night in Jasper that I was feng-shuing my room and I went outside with some "spare" furniture to find her picking the lock on the hot tub. Now we own a rebuilt short bus that we named the Murderbus. It holds a decent-sized dance party so it lets us steal friends away from their lives for a few days and drop them off at random airports when it gets too much. We have a bigger bus in Europe so sometimes our buddies prefer to fly over and help us instigate euro-madness.

7. Are you recording right now? Can you tell us about the new album? Who writes? What studio do you record in? Do you and sCaroline collaborate? Is it going to be on vinyl and when is it out?

Yep - the new album is called Bangtown and it's almost done - I'm listening to the producer Tod Simko come up with weird ideas with half my brain right now, we're at his place. A lot of my friends are doing little guest bits on the record, for instance Jimmy Roy from Ray Condo's band did some lap steel and Jenn from The Choir Practice did keys. The album is a continuation of the hotrod blues thing we started in with Mystiki but has kind of a '60's vibe to me. We have some cool old garage sounds on it. sCare-oline and I are not the kind of people that want to write the same album over and over - they all have a different flavour. And I'm really jacked on the songs on this one - we've worked hard on this for six months whenever we're home. It's our 4th CD and 5th release (including the live DVD we did) and every drummer we have played with is on there somewhere. Two of them (Mystiki & Bangtown) have had two drummers. It's the best way I can think of to change up the feel of the band without sCare-oline and I changing our actual style. And my friend I, Braineater has been working on the covers since 2003. As far as vinyl goes, yes, I have had an offer for it and I think it will work out this time.

8. Overall, John, it is impressive that you have turned your passion into a career. There must be a great business side to you. How did you go about getting a Jaegermeister sponsorship in Canada and how is your liver these days?

That's how I feel too - it truly is a passion. No one thought of doing a show like this before we blew onto the scene and I'm having the time of my life. As far as Jager goes, we worked with Turbonegro's tour manager in Germany a few years back and he got us a private tour of the Jager facility with one of the VP's. So I stayed in touch with her and that turned into us getting the first Jager sponsorship in Canada. We also have one with Pacific Driveline in Burnaby (who help us with our bus in Canada) and Sparrow Guitars have a line of strings called Big John's that are awesome. We work with friends and companies that fit into what we do so there isn't a compromise.

We do about 5 shows around BC (our next Vancouver show will likely be New Year's Eve at the Bourbon) then head across the continent for 25 shows - probably wind up as far away as Brooklyn before we turn back for home. And yes, there is gonna be some insane fun. Posted: Sep 8, 2008
In this Article Artist(s) Big John Bates, The VOODOO DOLLZ Burlesque

Slip Critical is a Production/Photography company aiming to ...
Victoria BC
Open / Operational

Sonora Mexican Fusion Grill was founded by a team of like-mi...
Open / Operational