THE BLACK HALOS We Are Not Alone 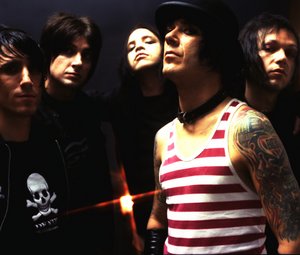 THE BLACK HALOS
We Are Not Alone
Acetate

God bless Billy Hopeless & the Halos. They’ve earned their entry into that category that bands like Motörhead, AC/DC, & The Ramones (the Holy Trinity of Rock) fit into – you always know what to expect with each album, and that’s why you love ‘em. Their newest disc, We Are Not Alone, is that familiar brand of Johnny-Thunders-riff-after-riff that you’ve come to expect. But so what?! After all the shit they’ve been through (four albums on four labels in twice as many years, line-up changes galore, getting all their gear ripped off while on tour in Montreal last March) – hell, it’s just nice they’re still in the game, hammering out the goods. Don’t get me wrong – I like this disc, just like everything they’ve done. It’s just that at this point you kinda get the feeling they’re preachin’ to the black-leather-clad choir. That said, the ode to beloved-and-disappearing Terminal City landmarks “Holes” clearly stands out as this disc’s anthem. Its a little down-tempo compared to the rest of the disc, and that may be its saving grace. Billy’s gutter-growl, channeling latter-day Dee Dee Ramone by way of Keith Morris, is as-usual in fine form here. The disc overall is a solid effort, and if it’s your first Halos experience, it’s as good a place to start as any. Posted: Aug 20, 2008
In this Article Artist(s) The Black Halos