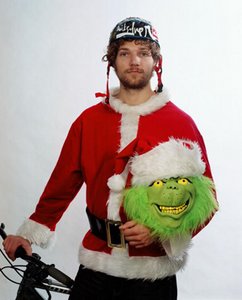 Fri Jun 20th, 2008
I played an acoustic show with Rich last summer at Hoko’s on an invitation from Ryan of Collapsing Opposites. Rich was touring on his bicycle from his hometown of Halifax to raise money for the Childhood Cancer Foundation. A couple of weeks ago, I noticed a poster for Rich’s show at the Railway Club on June 19th.

I later noticed that I still hadn’t opened Rich’s “Personal Publication” EP that I picked up at last summer’s show, so I played it a couple of times on my way to my part-time home on Texada Island. Since I have little knowledge of recent music beyond shows sold live for ten dollars or less, the only comparison that came to mind was Todd Rundgren. A better description of Rich’s music might be “accessible artistic adventurous dance music.” I was struck by the chorus from “We, the Dishonest, Honestly Swear” where Rich sings “If you find it hard when you try to follow, then you’re gonna find it hard when you try to swallow.” A lot of the song titles have descriptions in brackets like “a taking” or “an offering” or “an exploding.”

There were plenty of reasons for me to see Rich at the Railway but they were all derailed by a miserable day at work that left me paralyzed. I take my work very seriously and sometimes when I’m upset, my mind can race through the events of the day on a downward spiralling infinite loop. Fortunately, I managed to straighten things out Friday, and later found out that Rich was playing at The Peanut Gallery. I did miss both the Ford Pier show at the Biltmore and a free Doers show with Wax Mannequin!

The little dungeon that is the Peanut Gallery is found in a downtown alley, down a dark staircase and across a long hallway. The walls are covered with drawings that include a man in a Stetson hat holding a pool cue with a caption that reads “I looked into the spyglass, and it said if it had’ve said something negative, I would’ve left.” I really liked the face with flowery branches for whiskers and a house for hair. There was a Muzak Waste poster which reminded me of the Mutant Waste poster I made for the show I played with Jen Patches, Zolty and Tippy Agogo back in 1998.

I caught up with Rich so I quizzed him a bit for this article. Rich loves the couch surfing method of recording anyplace he can – studios and apartments all over Canada. He’s been out west four times now, twice as Rich Aucoin, and a couple of times with his brother Paul’s band “The Hylozoists” who recently opened for Besnard Lakes at Richard’s on Richards. Rich joked that he can’t wait to be billed as “Richard at Richard’s on Richards. Rich described “The Hylozoists” as “large orchestral film soundtrack music.” Hylozoism is defined in Wikipedia as “the philosophical conjecture that all or some material things possess life, or that all life is inseparable from matter.” For all you Canadian indie rock tourists, Rich says that Halifax venues include Gus’ which is booked by BA Johnson, Hell’s Kitchen which is a lot like Velvet Underground in Edmonton, and Seahorse which has a walk-in crowd like the Railway Club. The bigger touring acts still play at The Marquee Club.

Brasstronaut opened the show. They have an EP called “Old World Lies” that was recorded at Mushroom and Hipposonic Studios. Their myspace site says “With one heavy foot on the sustain pedal, Brasstronaut navigates by constellations, and is fueled by dreams of the old world, sadness of the modern metropolis, fjords and rotting rainforests, alpine meadows, elk, whales of all varieties, stroopwaffels, droopjes, and a general obsession for creating and experimenting with new sounds.” I loved their set and the vibe in the room while they played. Sometimes melancholy is the only breath I need and it often creates an odd euphoria. I particularly enjoyed being invited to burn down the internet.

Rich Aucoin bounced over to his keyboard dressed in white with a tie and sneakers. He played a set of new material in front of projections of Jimmy Stewart and Vincent Price. Rich’s backing tracks have a solid “raver scene” punch which had everyone dancing unpretentiously. Smiles were the easy friend to find and it felt okay to be old even if everyone else wasn’t. Without a break, Rich presented his “Personal Publication” EP which he’s synced to the animated version of “How the Grinch Stole Christmas.”
Rich Aucoin is a living breathing Canadian art project. I feel much better, thanks Rich. Posted: Jun 29, 2008
In this Article Artist(s) Rich Aucoin, Brasstronaut Resource(s) The Peanut Gallery