The Upsidedown / The Dandy Warhols 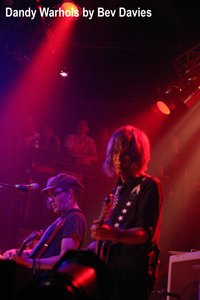 With the 2008 Vancouver International Jazz Fest getting under way, the illustrious Commodore Ballroom is pretty well taken for a month or so solid at this time every year. As such, I was not so much surprised but curious that the UK gold and Australian platinum selling Dandy Warhols were slated to play the Vogue. Though I'd never seen the notorious Portland quartet live before, I couldn't imagine their vibe would suit a polite, vintage sit-down theatre. Then, at the last minute, they switched over to the grungy, open-pit Dick's On Dicks. Even if the venue was shockingly undersized for a band of this magnitude, the balance of the universe felt restored.

As the evening began, a co-ed sextet called The Upsidedown warmed the crowd up as best as they could. Aside from the fact they were also from Portland, it was easy to see why they got the nod for this gig. They were like a cleaned up version of the Dandy's pals in the Brian Jonestown Massacre, if Anton Newcombe decided to go Robert Palmer after Dig instead of humorless, drug-free drone. Granted, they were as tight as you would want and they seemed to have a good time, but they left all molds unbroken and the sweaty lead singer's voice came off more ZZ Top than Chris Isaac, neither of which he was going for (at least I hope not). Their songs all ran together as the set stayed at the same lukewarm level throughout. To their credit, judging from the voraciousness of the slurred cheers, they appeared to rock the Wednesday night crowd to a satisfactory degree.

By the time the Warhols got around to taking the miniature corner stage, Dicks had filled to the brim with a mix high in scenesters begging to be seen, some more humble true faithfuls, and a few dozen puffy muscled frat jocks drowning in cologne who only came out to hear "Bohemian Like You." They were a thoroughly groomed and well-lubricated bunch. Much to the meaningless chagrin of the jocks, frontman Courtney Taylor-Taylor immediately announced they would be starting off with several selection from their latest record Earth To The Dandy Warhols, at the time available only on their website. Seemingly bent on getting as far away from the synth heavy, new wave sound that dominated Welcome To The Monkey House, the new tracks pointed back to classic rock and, surprisingly, white guy funk.

Throughout the evening, Courtney often broke down into a comically lower register, one that parodied the Cobain on Tops Of The Pops does Morrissey tone. That voice sure added a new level to the power trio version of "You Were The Last High," with Zia McCabe sparingly using synths for color, but it often merely distracted from the originals. About half way through the set, they broke out with their biggest ever single "Bohemian Like You" and the rowdies jumped and shouted all the words in appreciation. That crowd movement persisted for the rest of the evening, which then fell into a comfortable, well-rehearsed rhythm of requests and favorites from across their catalogue. Ho hum, just another day at the office.

I'm thankful for the opportunity to have seen them in such an intimate venue. You can really get a sense of someone's personality when, no matter where you stand, you are within spitting distance. The Dandys are a professional band, no doubt. They got in a zone, played their songs, and acknowledged the crowd, who responded in kind. However, there seemed to be a certain arrogance that exuded from Courtney's demeanor, exacerbated by his Morrissey mocking. Zia looked bored as always and the rhythm section, though among the most fashionable I've seen, seemed lost in its own world. It's certainly a gracious contrast to the last time BJM played here, what with shirt-less Anton's pointlessly racist and sexist closing tirade, but I didn't find they really engaged the crowd all that much. They made their performance seem pedestrian, though certainly polished, while capturing all the nuances that make their studio recordings so memorable. For all intents and purposes, I might as well have been watching a DVD. Posted: Jun 27, 2008
In this Article Artist(s) The Dandy Warhols, The Upsidedown Resource(s) Richard's On Richards