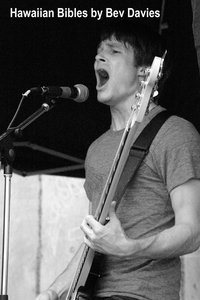 Jesus fucking CHRIST!!! This city is a veritable loot-bag of musical talent, and it becomes more apparent to me every time I get my ass out to see some live music that there's much more going on under my nose than I thought…and Friday night’s offering to the 14th Annual Music Waste Festival was no exception. Four bands for 5 bucks; how can you go wrong? Especially when it's a lineup as smashing as this night! Kicking off the proceedings were the good people in Hawaiian Bibles. Imagine a race-car (fully engulfed in flames) doing 200mph. Now imagine that all four wheels are about to fly off. Sounds like trouble? Not when the Hawaiian Bibles are driving. These fuckers are crack drivers who delivered an opening set that was death-defying and beautiful, adding keys to some tracks and lightly spicing up others. Holy cats, can you guys get any better? Like, really? So uhhhhh, when did Neil Young and Black Keys start dating? I didn't even know they liked each other, let alone having a child together called Land. I was really excited to check these guys out and I was not disappointed. Two guys making HUGE chunky sounds that made my heart go bump and my feet go jump was A-fucking-OK with me. It was like stoner-rock, minus the burnout. Watch for this band, buy their CD and see them live because they're that damned good! I realized by end of set #2 that as lousy as it makes me feel later on, drinking is rather integral to coming away with a colorful live experience to write about, so I continued to drink the horrible butterfly-piss served at the Astoria and pretended it was gold as I watched Owl Drugs set up. Now I notice that the Astoria stage is pretty near the size of a paper napkin, yet Owl Drugs managed to fit 4 dudes onstage and made good use of it. But I suppose it takes a cohesive collective to be able to play hard and thrash around while dodging your bandmates and playing really well at the same time. Owl Drugs were a little bit Minutemen, a little bit Fugazi and a lot of high-energy awesomeness, complete with all around band tightness, fun time signatures and clapping. Yes, there was some clapping. Good times!

1:20am and Mohawk Lodge was up next. I was beat and had to work the next day so I was able to catch only about half of Mohawk’s set, but I’m really glad I did - even in my beery bleary sleep-craving state I was pulled from my seat and slapped silly by the sheer talent this night had to offer. Mohawk was dessert, to be sure, and I am officially a Music Waste convert.

Thanks abound to the organizers and bands alike both present and past that have made this thing happen for the last 14 years.