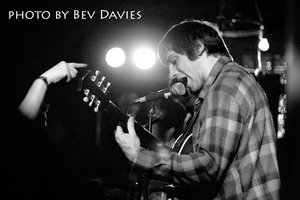 For the first time in many moons, I really made the effort to make it out on time for the opening band, and man! What a treat! I believe a lifestyle shift is in order. As a young teenaged music-nut, I would risk life and limb to make damn sure I didn't miss a precious second of any gig. My oh my, how I would roll into town from the 'burbs, hopped-up on sheer stokes. But you get old. And jaded. You get used to the city and all that magic so close to your fingertips...

But then sir, lemme tell you 'bout The TVees. Whoa! Three-piece, the usual guitar-drum-bass, rhythm section looking like twinsies (found out later that they're brothers!), both big, bald, and bespectacled. Everyone is dressed-up – though not silly, or costumed, or trendy, or fancy-shmancy – just SHARP. Suddenly they burst into the boogie-ing-est groove I've heard in this lifetime. I'm hooked in half a second. Where did this band come from? Where have you hid? They play good ol' rocknroll with the chops of 20-year vets, but with the charm of horny teens in a church basement. They tackle Chuck Berry's “I Want to Be Your Driver',” and not only make it their own, but blow the lid off five decades of rock “progress” in their midst. God, what a party for my ears. I have a celebratory drink. I wish it would never end, but it does, and herein lies the problem: nobody else tonight holds a chance in hell of topping the TVees...

Particularly the follow-up, Get Well Bomb. I don't like being mean to local bands, but I really don't think this band was either trying very hard, or prepared for the rigors of live performance. For one thing: tune your goddamn instruments, please. Unless you're going for something avant-garde and extremely explosive punk/noisy, it just doesn't work to be tuneless (and even then, only very, very rarely, and you need to be more schooled and talented at audio manipulation than you think, lazybones). And please learn to sing – or, failing that – learn to scream. And what was the drummer doing??? I'm sorry; I really think this band needs to practice. Yet the strangest thing was that GWB pulled maybe quadruple the crowd that my beloved TVees did. Why?? I'm hoping it's 'cause the Pub 340 crowd had physically quadrupled in size while I was buying beer, on this here first eve of Music Waste...

Dead Ghosts are plenty fun, sorta. Everyone loves them, they're new darlings of a sort. Front-and-centre with the monster shades and the yelps (former bassist for Green Hour Band...don't know his name) is sure one charismatic dude. Big big sloppy garage-revival rock. I heard a couple Black Lips here and there. I thought they were fun, though their songcraft wasn't particularly memorable. The crowd ate it up but I gotta admit the big sticking point – I would've dug 'em three times as much had I not already seen The TVees an hour ago, wiping the floor with that whole wide weird world of Vancouver record-collecting analog-revivalist garagiers. Sorry!

The B-Lines feature a couple dudes from Fun 100. Admittedly, I never really investigated the first band, but word is it's quite the same deal. Messy, punk-screamy, fun pop. It's all a big blur, but no one really minds. The frontman is so funny and watchable that it makes up for a lack of coherency. I wish I could remember all his jokes. I was supposed to write them down, but the Pilsner was slowing my work ethic. But I tell ya, friends, top-notch between-song banter goes a long way! I like anyone who's lanky and awkward and stomps back and forth with no sense of purpose or rhythm, spouting deliriously clever asides, just pacing the stage like he's thinking really hard and gonna explode. It reminds me of this polar bear I once saw at the San Diego Zoo, who circled around and around for at least 20 minutes (but maybe more), obviously stricken with terrible cabin-fever and finally, totally, losing his poor imprisoned polar bear mind. For the B-Lines' brand of ADD/fun/punk, this approach works wonders.

So I left, feeling really good about Music Waste – I should interject that the Music Waste folk commissioned absolutely beautiful hard black, silver-printed festival passes this year, real collectible works of art – yet I felt absolutely terrified at the possibility of all the amazing music I've missed through the years from all those skipped opening bands. Punctuality has its rewards. I also got to thinking that there was a time when people practiced for years to master their craft long before they ever even dared to call themselves a musician and hop up on stage... and how I really wish that particular aspect of The TVees was a more common aspect of this still-burgeoning 60's-throwback clique...
Nonetheless, good show. Peace! Posted: Jun 25, 2008
In this Article Artist(s) B-Lines, The TVees, Dead Ghosts, Get Well Bomb Resource(s) Pub 340, Music Waste