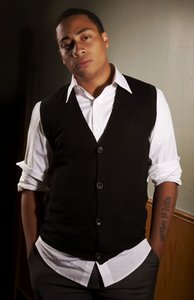 I'm a white rocker, born of Abbotsford. All through high school I associated rap music with delinquents farting bass out of Honda Civics and punching people. But time passed, and at SXSW in Austin this past March, I stumble upon the Canadian Hip Hop Explosion, wherein some cat is rapid-firing brain shells in a calculated mayhem so volatile, energetically original and balls-droppingly rock'n'roll that audience skulls (like mine) simply combust. Cadence Weapon! Or Rollie Pemberton, whatever you want. A fascinating dude. Son of the late Teddy Pemberton (radio DJ for "The Black Experience in Sound," which introduced hip-hop to Edmonton in the early 80's), young Rollie studied journalism and wrote for Pitchfork before getting fired and choosing music. He reads Lester Bang's Main Lines, Blood Feasts, and Bad Taste. A mere twenty-freakin'-two, and dangerously competent.
Over the phone from Halifax, Pemberton explains his channel-panning beat marvels as, “Sample pastiche stuff, really cut up, soft synths and my DJ scratching over it.” His first album, 2006's Breaking Kayfabe, eschews a Nintendo influence. “More sample-y, darker & spooky….kinda slower, and more methodical,” he adds. By comparison, the brand-new Afterparty Babies is: “Way faster, House-influenced. More electro. I've been definitely influenced by the club scene that way.” It also opens incongruously with a-cappella and is dedicated (apologetically) to ‘Stephanie.’
“Stephanie is a girl that exists,” says Pemberton. “She's a kind of muse. I inadvertently write about her all the time. She's just a girl that I really used to like, and now she lives in Germany. She has this sense of youthful excitement. She reminds me that I'm actually still a young dude.” Stephanie is all over the album - '”Tattoos (And What They Really Feel Like)” uses Rollie's tattooist as bartender/shrink for his girl troubles. It's story-oriented, like all Cadence material. Pop-culture-referencing, literate, personal or (like “The New Face of Fashion”) poking great fun at Rollie's annoying hipster culture.
“South By was pretty cool,” Pemberton gushes. “We had to do a fanatical amount of shows - six shows over three days! And our gear melted, eventually. The CDJ - a signal turntable that we put CDs into to play our beats – it melted outside.” When asked of using organic instruments: “Well, the next record will be that,” Rollie answers. “I mean, I kind of have a specific idea of where I want to go sonically with every album I do. The next one, I'm getting ready to start a band. It will have human parts – the band and my DJ. World conqueror shit.”
Pemberton muses on Edmonton: “It's a lot more artistic than people give it credit for. We're a happy people. Everyone I know is an artist - all my friends. Most of them end up moving to Vancouver anyway. I feel like now it doesn't really matter where I live. I live kind of a transient, nomadic existence. But I can see why Edmonton can also be a hard place for a young artist to live. There are not a lot of opportunities. One of the main focuses of the album is the transient nature of youth. And that's the reason that I have all my friends on the cover, and on the back they're gone. ‘Cause I feel like eventually these young people will decide to go somewhere else, to change their life or whatever. It's very strange. I feel kinda like... I feel floaty, all the time. I've been having trouble sleeping. It's fun, but it's kinda weird not having normal stuff that other people have. I'm shocked that I can maintain a girlfriend!”
Thoughtful and concerned, yes, but live Cadence Weapon shows no respect for body or ego. It's a balls-out hype party, freaky all over the room. Rollie Pemberton (and co-hort DJ Weez-l) visit Vancouver (with Buck 65 and Scratch Bastid) Wednesday May 7th at the Commodore Ballroom. Posted: May 6, 2008
In this Article Artist(s) Cadence Weapon