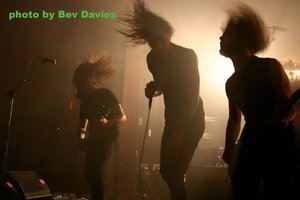 Until this impeccably brutal show, I believed the Croatian Cultural Centre was to be avoided at all costs, but the nagging issue of dreadful acoustics in the main auditorium was rendered moot. The onslaught occurred in a significantly smaller (and less ‘gym-tastic’) version of the same room - my faith in one of Vancouver’s most notorious safe havens for all-ages events is near fully restored! Having adjusted to the new digs since that day’s earlier interviews, I hit the CCC with renewed enthusiasm. By 6:45 PM the place was teeming with eager hordes, and the merch tables were already doing a brisk business. I made my way to the front of the stage, where Jacksonville FLA’s Evergreen Terrace was laying down some serious tread.
Considering lanky frontman Jon Brusoe continually complained about being “so fucking tired,” his performance didn’t suffer much. Flanked by ferocious bassist Jason Southwell and guitarist Josh James, the band tore large imaginary chunks out of the front row. The carnage was a sight to behold, and the familiar surge of metal adrenaline circulated throughout the crowd. I realized during “New Friend Request” how well the sound was mixed for the room. Craig Chaney’s clean backing vocals came across loud and clear against Brusoe’s relentless growls on virtually every song.
Next was Lancaster PA’s August Burns Red. Is it right for a music writer to comment on a band’s fashion sense? I realize a band’s wardrobe has little or nothing to do with their actual sound, but this is a live performance after all. Half of ABR looked like they came straight from an assassination attempt on Jack Nicklaus, while the rest of ABR had time to gel their hair and pose for American Eagle ads before hitting the stage. Musically (and positively) Jake Luhrs et al definitely bring the heavy - drawing largely from 2007’s Messengers and 2005’s Thrill Seeker, the band combined cool confidence with crushing power. Opting for a rooted stance center-stage, lead guitarist JB Brubaker demonstrated technical prowess that secures him amongst the face-melting elite.
Fresh from their headlining Euro-tour, Wisconsin’s Misery Signals joined As I Lay Dying’s outing just last week. I spoke briefly with guitarist Ryan Morgan about MS’ upcoming release Controller (produced by Vancouver mastermind Devin Townsend). “Devin’s a great dude to collaborate with”, Morgan praises. “He busts his ass hard, and that’s rare to find in people you work with. If you’re into this kind of music, he’s definitely one to admire.”
While many hardcore bands prefer more traditional songwriting approaches, MS instead choose to carve their own niche. “We all listen to different stuff”, Morgan explains. “Hardcore has this set formula a lot of bands adhere to. We could look to our peers for guidance, but we like to look elsewhere and make it interesting.” Live, MS blends all the hardcore elements one expects - raw energy, ruthless riffs, shitloads of groove. Lead vocalist Karl Schubach spat lines from “The Failsafe” like nails into battered coffins, while the dual guitarsenal of Ryan Morgan and Stuart Ross shredded on. Every subtle nuance and breakdown rang out like a well-mic’ed pin-drop.
As I Lay Dying’s Nick Hipa is a genuinely nice guy. As he stepped into the band’s tour van, he apologized to vocalist Tim Lambesis for scarfing what he had thought to be “community” cottage cheese. Here’s a dude who believes in rigorous honesty and strives to apply it, not only in his music but in every aspect of his life. I spoke to him about his thoughts on AILD’s latest album An Ocean Between Us. Due to technical issues I am unable to provide direct interview quotes; however, Hipa states that the band has progressed musically and has reached a certain maturity with An Ocean Between Us - the band prefers to write “solid” songs instead of writing simply “for the sake of complexity”.
The band’s performance was awe-inspiring; the crowd’s waning energy spiked dramatically with the opening strains of “Separation,” leading us directly into an intensified version of the Grammy nominated single “Nothing Left”. The set continued focusing on An Ocean Between Us - high points being an expertly-executed “The Sound of Truth” and a devastating rendition of “Within Destruction”. Never have galloping triplets sounded so hugely punishing. As an after thought: Nick Hipa’s Ultimate Warrior T-shirt added the extra thunder needed to push the audience over the edge. Maybe there’s a link between fashion and music after all. I stand corrected. Posted: May 6, 2008
In this Article Artist(s) Misery Signals, Evergreen Terrace, As I Lay Dying, August Burns Red Resource(s) Croatian Cultural Center