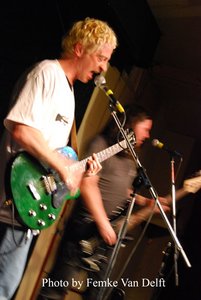 There were moments of giddy transcendence a few weeks back when this very magazine held its official Launch Party featuring a host of Vancouver talent, among them a long-standing (but largely overlooked punk band) named Aging Youth Gang, whose members have been ripping it up in basements and boozecans since Bill Bennett’s reign as Premier. Now, I’m not too familiar with the punk genre but I’m certainly not ignorant to the goodness it can bring - its joyride of pointed cynicism, rapid-fire timekeeping and guitar that shreds skin. Believe me, Aging Youth Gang brought the punk and I loved it.
I spoke to guitarist/vocalist Sandy Beach about their long history and how they came to be.
“AGY started in 1991,” says Beach. “Before that I played guitar in the Spores from '83-'89. The Spores singer got progressively busy shooting film and he couldn't commit to playing gigs, which was the direction we were heading, so we ended it. There was another Vancouver band called Curious George who was breaking up and I asked their singer, who was a good friend, if he wanted to form a band with myself and the drummer. After hiring a different bass player AYG was born.”
Sandy shares how Chris, their current guitar player fell into the fold. “Chris has been in AYG for ten years now. When AYG started he was in 5 Against 1. This is when the ‘What Gallery’ was going and we’d play after-hours gigs there. Chris joined the Insipids for a while and when they broke up, Ian (AYG’s original singer-guitarist) started getting busy outside of the band and had to back out. Chris took over guitar and I thought about taking over vocals because I’d already been singing a bit when Ian wasn't around. So I gave it a whirl and found that I could hit most of the notes and it just became really comfortable and fun.”
Surprisingly, with all of these years belting it out in a who’s-who of punk greatness, one of their most significant achievements came only a couple of months ago.
“One of the best experiences we've had was opening for the Circle Jerks at the Commodore. The promoters had moved the venue and wanted to fill the card with another band, and actually, DOA’s Joe Keithley recommended us. So we worked up a nice short set, thinking ‘Oh well, it'll be really early and we'll play for a half hour to nobody - but we're playing the Commodore and that's really cool.’ We get there and find out the band who was supposed to be supporting the Circle Jerks couldn't get across the border; we get asked to play a longer set - and we freaked a bit - but pulled it together, thinking there'll be only ten people watching. We come out and plug in and there are about 200 people there! We start playing, and the most amazing thing is that everyone starts moving to the front and people are cheering and singing along to some of our songs. It was really an amazing experience for us.”
Despite the odd brush with fame I wonder what compels a group of raggedy old punks to keep playing for so long while remaining under the radar?
"It's fun! We all have jobs so we don’t tour, but we all take the music seriously and we try to do it as well as we can. We practice when we can, write and record when we can, play shows and just have fun. One of the nice things about this band is that it's always been my friends and we just get along really well. We have the music, the beer (support the R&B brewing company!) and we have a good time. We like to call Aging Youth Gang our ‘serious hobby band.’”
You can check out this serious hobby band when they open for the Dayglo Abortions at the Cobalt (917 Main) on April 25th. This promises to be a CRAZY fucking show, so dust off your leather and bring a gut made for drinking…some old punks want to kick your ass with fun. Posted: May 1, 2008
In this Article Artist(s) Aging Youth Gang