BLACK MOUNTAIN: In the Future In the Now 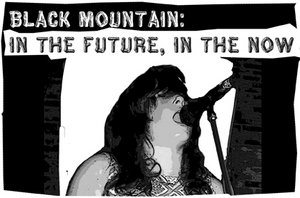 “Fucking Amazing,” says drummer Joshua Wells about Black Mountain’s current North American tour. “This is the best tour I’ve ever been on. It’s been unbelievable at times! We’ve played a few places we’ve never been before…Baton Rouge, Louisiana; Birmingham, Alabama; Atlanta, Georgia – which we really enjoyed - the most recent place that was new to us was Portland, Maine – and THAT was a real fucking shocker! Portland’s a fairly small city, but there were 300 kids there anyway, on a Monday night! That kind of shit doesn’t happen that often back in Vancouver, you know?”

Back here in Vancouver, Black Mountain is currently riding at the top of the indie-rock heap. Their second album In The Future was released worldwide on Jagjaguwar in January, and everyone’s since been crapping their boutique retro-trousers in glee. The album currently tops international indie charts and will probably remain there for quite a while; building on the established sounds of their eponymous 2005 debut, Black Mountain reinvents early-1970s acid-rock values into an enjoyably unique sound and vision that’s all their own, damn straight. Stunning tracks like “Tyrants” show how Black Mountain are way smarter than mere stoner rock, moving through lengthy three-part song structure that carries moods and captures the ear. Sounds like progressive rock. Sounds like Black Mountain.

“We worked really hard on In The Future,” states Wells, “and it turned out really good. We had lots of material to sort through; four or five songs didn’t make the cut. But we’re always writing – just before we left on tour this time, we finished four new songs. We’re not playing them live yet, but we’re practicing them whenever time allows, during soundchecks and such. It’s nice to keep things fresh.”

“The scariest gig I’ve ever played in my life was appearing on the Conan O’Brien show,” Wells shares. “It was sort of intimidating to have all these cameras zooming in on you, and you have to do it live, and you only get one take. You just go up there and play your song, and in your head you’re going: this is on television! The technical crew was really nice there, no one was giving us the stink-eye, but this was the sort of thing where everyone’s Mom and Dad was watching.”

“It was an unusual experience for us, but it was very fun,” adds keyboardist Jeremy Schmidt. “You launch into what you do, without any real warm-up time, at the drop of a hat…and you’ve got four minutes to do it. You walk out there, you play, and then it’s over! Oftentimes when I watch TV performances, it sounds a bit dry – it doesn’t sound like there’s any atmosphere or any energy to it. All you hear is the snare drum and the lead vocals and everything else is muted. We didn’t really get to talk with Conan. He sort of greets the band after you’ve played, and says hello to you for a minute, and that’s about it. We didn’t pursue him or anything. We figured it was his ‘work day’ and didn’t want to be a bother. We’ll be appearing on a few radio sessions while we’re touring, but nothing else quite like late-night TV.”

And good for them. Better Black Mountain representing Vancouver on a high-profile international level than Nickelback, hein? The band (also featuring guitarist-bandleader Stephen McBean, vocalist Amber Webber, and bassist Matt Camirand) has made the Strathcona Beard cool for the masses – it looks Christly divine, yes, even if it won’t earn you points with the CIBC loans department – and Webber’s angelically priceless voice proves that Vancouver’s rising co-ed element makes our bands better. Stronger. Faster. Blacker.

The discussion turns to Wells’ recent listenings on the tour-van stereo. “I recently got into Talk Talk’s Colour of Spring, which was their transition album after they hit the charts with ‘It’s My Life.’ A bit New Wave, but they’re heading into different directions. Very ambient and interesting. And earlier on this tour we played with a few bands that I really enjoyed – Howlin’ Rain, who are fucking awesome, we did the whole West Coast with, and the other band is Blood On The Wall. I listen to their music quite a bit.”

Black Mountain marks the midpoint of their 2008 fracas with a triumphant hometown return to the mighty Commodore Ballroom on Saturday April 5th, supported by their spirit-siblings in Ladyhawk (who will be given their own gushing praise in these pages in future issues – stay tuned). By the time you read this, the show might be sold out, so get cracking on those tickets!

Let’s hope this photon-paced whirlwind doesn’t wear out our heroes too soon. There’s a shockingly high concentration of unabashed talent milling about within the Fab Five, and whatever they can’t collective conceive within the boundaries of Black Mountain usually ends up in the quality output of their other extracurricular projects: Camirand and Wells have Blood Meridian, Webber and Wells have Lightning Dust, Schmidt has Sinoia Caves, and we’re sure McBean has more than a few tricks up his beard (some of us are rooting for a Jerk With A Bomb reunion, but as if that’s going to happen).

Schmidt reflects on Black Mountain’s current international success. “It feels a little strange to drive all the way out to Asheville or Portland and have hundreds of complete strangers turn up at your shows. The new record seems to have a broader reach this time around, than in previous tours. But we’ve been at this now for over three years and it’s what we’ve put most of our efforts into, but it’s great!”

All reports indicate that sailing the rocknroll seas with McBean’s Navy is generally a good-natured adventure, and the band strives to keep things smiley. “The best thing we can do to keep us from going stir crazy on the road is to schedule days off, at least every four or five days when we’re out so long like this,” Wells explains. “When you’re always traveling together and playing shows, there isn’t time for everything, and what usually suffers is sleep. Although you might be tired before you play, usually after you play you feel like partying and drinking. And then you wake up in the morning and: Oh My God! I feel terrible! I slept for four hours and now I have to drive for six! So it’s good to have a day off, if only to sleep.”

Asked if he feels that the members of Black Mountain are becoming seasoned road warriors, Wells responds: “Yeah, I do! We’ve definitely acquired that attitude of people who’ve been doing this awhile. I’m 32 years old and starting touring when I was 19. And now I know every Taco Bell on the Eastern Seaboard. Fantastic!” Posted: Apr 1, 2008
In this Article Artist(s) Black Mountain